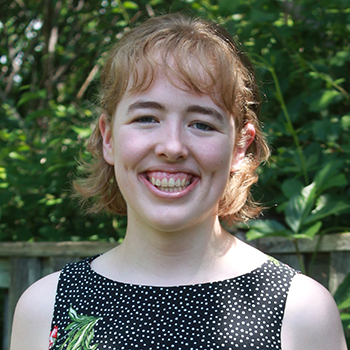 An essay by Emma Stobo, a recent graduate of the Languages and Literatures program at Wilfrid Laurier University, has won first place in the undergraduate category of a publication competition hosted by The Canadian Association of Hispanists.

Stobo wrote for an assignment in the fourth-year Spanish course SP496: Coming of Age taught by Laurier Associate Professor Marc Olivier Reid during the fall 2021 term. The course provides students with the opportunity to analyze literature and youth culture in depth by reading and comparing coming-of-age novels published in the Hispanic world.

"I had a great experience in SP496 learning about Spanish-language coming of age stories," says Stobo. "Our class discussions were lively and engaging, and I came away with a deeper understanding of the bildungsroman genre as a whole. I was especially fascinated by the contrast between the classic bildungsroman, with its usual male protagonist, and the female bildungsromane we studied in class, so for my essay I chose to explore two of the course's female bildungsromane and their relationship with the traditional bildungsroman structure as described by Franco Moretti. I’m so grateful that Dr. Reid suggested submitting my essay to the contest. I never would have done it without his encouragement."

Stobos graduated from Laurier in June 2022 and received the Alumni Gold Medal as the highest achieving student in the Faculty of Arts’ class of 2022.