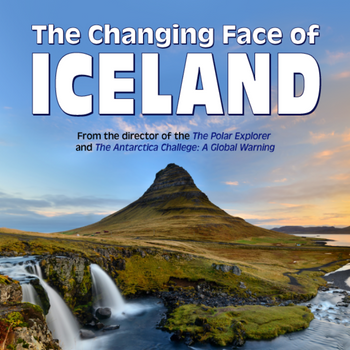 Climate-driven crises are impacting communities around the world, forever changing landscapes and ecosystems humans and wildlife have come to rely on.

The impact of the climate crisis in Iceland is captured in the internationally renowned documentary The Changing Face of Iceland, written and produced by Wilfrid Laurier University instructor Mark Terry. The 52-minute documentary details the rapid melt of Iceland’s glaciers, the rising temperature of surrounding sea waters and the impact of climate change on Icelanders.

The Changing Face of Iceland has won 12 international film awards to date, including the best environmental film award at the Global Indie Film Festival, held in Glasgow, Scotland in July.

Below, Terry shares insights about the film’s success and its purpose.

Why is The Changing Face of Iceland an important film?

The Changing Face of Iceland is an important film for two reasons: one, it is a current report of scientific data on the impacts of climate change on weather patterns, animal populations and distribution, geologic and volcanic activities, as well as the economy and people of Iceland. The film premiered at the United Nations (UN) Convention of the Parties, the UN’s annual climate summit, held in Glasgow, Scotland last November, and has been added to the UN’s online database of documentary films as a resource for international environmental policymakers.

The film is also important as it is the first time that I collaborated on a documentary feature film production with international universities and students. Through the United Nations Framework Convention on Climate Change’s Youth Climate Report, I recruited researchers from five universities — Laurier and York in Canada, the University of Colorado at Boulder and the University of Maine in the United States, and Queensland University in Australia. Their researchers and students assisted in the shooting, editing, script-writing, and computer-generated imagery for the film, making it my first student co-production in 30 years of filmmaking.

Climate change in the polar regions serves as a bellwether for the rest of the world.

What is contributing to the film’s success?

The film’s success is based on the content. Any film addressing climate change is of general interest these days and Iceland happens to be an unusual location for this kind of story. Many people are fascinated with Iceland; it has become the world’s number one destination for eco-tourism. Its 10,000 waterfalls, active volcanoes and stunning landscapes are becoming well-known around the world, which adds to the film’s fascination and intrigue among the general public, scientists, and UN policymakers. 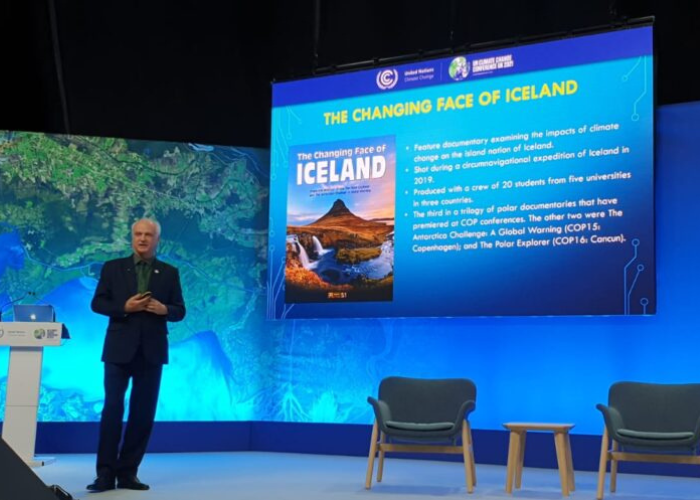 Photo: Mark Terry introduces The Changing Face of Iceland at its global premiere during COP26 in Copenhagen in November 2021.

The Changing Face of Iceland is the third film in your trilogy of polar documentaries. Why have you chosen to make films about these parts of the world?

I am fascinated by the polar regions. I visited Alaska several times in the 1990s and fell in love with the majestic scenery, Indigenous peoples, and culture. When I learned about International Polar Year in 2008, I decided to make a documentary about Antarctica, which completed my quest to make a documentary film on every continent on Earth.

When the United Nations invited me to screen The Antarctica Challenge: A Global Warning at its COP15 climate summit in Copenhagen in 2015, I was convinced that films were essential for documenting research and data for scientists and policymakers alike. Climate change in the polar regions serves as a bellwether for the rest of the world. My next film was The Polar Explorer, the first film to document a crossing of the Northwest Passage in the Arctic. I completed my polar trilogy with The Changing Face of Iceland in 2021. Collectively, the three films have won 42 international film festival awards.

I want to demystify these places — and the scientific research — so that climate change data is more accessible. Film is best at doing that, I believe.

What motivates you to produce films?

I feel compelled to document the impacts of climate change on relatively unknown parts of the world, like the polar regions. While this can feel like a domain for scientists, I want to demystify these places — and the scientific research — so that climate change data is more accessible. Film is best at doing that, I believe.

To view The Changing Face of Iceland online, email icelandproductionsinc@gmail.com to obtain a password to the film’s screening room.