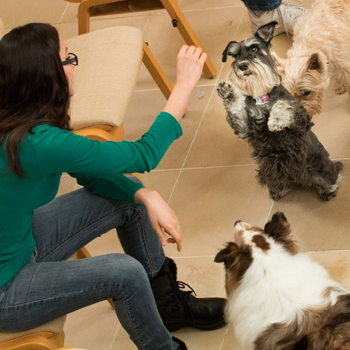 Kristine Lund became interested in animal-assisted therapy after learning that student clients reported missing their pets while away from home to attend school.

“Our clients could talk on the phone with their parents or friends, but they couldn’t do that with their pets,” says Lund. “In the counselling community, we know that interacting with animals has immense therapeutic value. I had a new puppy at home at the time, and it got me thinking about how to support students missing their pets.”

“Students could relax and destress among the dogs, because the dogs asked nothing of them.”

That’s what led to the creation of the weekly events called Chilling with Dogs, which recently restarted after a pandemic-related pause. Chilling with Dogs invites Laurier and Martin Luther University College students to drop in and destress with well-socialized pet dogs of faculty and staff members. Bernese mountain dogs, Labrador retrievers, Jack Russell terriers and papillons, among others, have made up the roster of well-socialized furry friends at the event. Chilling with Dogs takes place Wednesdays from noon to 1 p.m. in the Keffer Chapel.

Lund piloted the Chilling with Dogs event ahead of the spring 2014 final exam period. Students could interact with her puppy Annie, a four-month-old Portuguese water dog, and Jaeger, an eight-month-old soft-coated Wheaten terrier inside the Keffer Chapel on the Luther campus.

“Some students got on the floor and played with the puppies, and some would just watch the interaction,” says Lund. “The students certainly looked different from when they came into the event. They would come in quiet and curious and would then open up and start talking — about the puppies, their pets at home or about their upcoming exams. The mood in the room changed because of the dogs.”

"In the counselling community, we know that interacting with animals has immense therapeutic value."

The pilot event inspired Lund’s research on pet-assisted therapy in university environments, particularly the use of dogs during final exam periods. In 2017, Lund conducted a qualitative research project to gauge the impact of exposure to dogs on student stress levels.

“Students reported a change in their emotions while being involved with the dogs,” says Lund. “For some students, the change was quite dramatic.”

Of the 74 students who self-selected to participate in Lund’s research, 73 reported a positive change in their feelings after interaction with the dogs and all but one participant reported no change in the intensity of stress levels after exposure to the dogs. Lund’s findings were detailed in her paper “A Puppy’s Touch: Destressing with Dogs in a University Environment” and published in In Touch and the Helping Professions: Clinical, Research, Practice and Ethical Issues (University of Ottawa Press, 2017).

In 2018, Lund repeated the research in collaboration with Assistant Professor Kate Harper. The research involved measuring students’ blood pressure, heart rate and cortisol levels before and after their interactions with the dogs. Results showed a dramatic reduction in the biomarkers, despite being a small study sample.

“Students could relax and destress among the dogs, because the dogs asked nothing of them,” says Lund. “Students could just show up and take what they needed from the experience.”