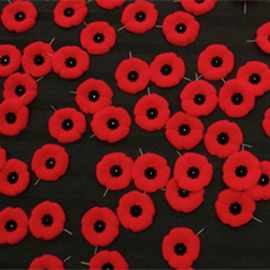 Wilfrid Laurier University will honour Remembrance Day during in-person events at the Waterloo and Brantford campuses on Friday, Nov. 11.

The Laurier History Students’ Association and the Students’ Union will host a Remembrance Day ceremony on Friday, Nov. 11 in the Turret, located on the third floor of the Fred Nichols Campus Centre. Doors will open at 10 a.m. The ceremony will begin at 10:30 a.m. and will include a reading of In Flanders Fields in English and French and a live performance of The Last Post by a Laurier music student.

The City of Brantford’s Remembrance Day ceremony will take place in person at the Cenotaph, located at the corner of Dalhousie Street and Brant Avenue, beginning at 10:40 a.m. Weather permitting, vintage airplanes will fly over the city at 11:15 a.m. as part of the “Look Up and Remember” initiative organized by the Canadian Warplane Heritage Museum.

The 2022 National Remembrance Day ceremony will be streamed live from the National War Memorial in Ottawa via the Royal Canadian Legion’s Facebook page.

This year marks the 80th anniversary of the Dieppe Raid. On Aug. 19, 1942, nearly 5,000 Canadian soldiers came ashore on the heavily defended French coast alongside British and American allies. Although the raid — also known as Operation Jubilee — resulted in significant loss, it provided insight used for the planning of D-Day and victory on the beaches of Normandy two years later.