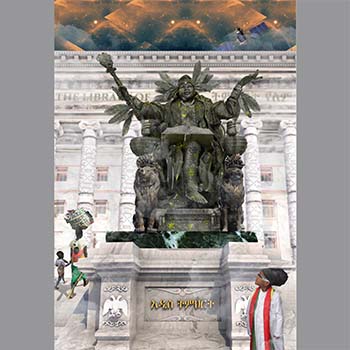 Above: 'LIbrary of Unlearning.' Below: 'Solar Proprietor Balling.'
Sankofa Dias exhibit at Laurier’s Robert Langen Art Gallery imagines an Afrotopia through use of ancient and futuristic imagery

Sankofa Dias: Visions of the Afrotopia, a digital mixed-media exhibit currently on display at Wilfrid Laurier University’s Robert Langen Art Gallery, explores the philosophy and concepts of “Sankofa,” a word from Ghanaian languages that refers to retrieving wisdom, power and hope from the past.

In creating the collection of digitally sculpted 3D illustrations and animations, Toronto-based artist, storyteller, activist and educator Quentin VerCetty took inspiration from the sculptural works of the ancient Nok (1500 BC), the Ifẹ̀ empire of West Africa (11th century CE) and the Aksum of East Africa (100 CE). Using Afrofuturistic imagery, VerCetty created visions of an “Afrotopia,” a safe space for Black existence that includes representations of Blackness in the landscape.

Through his work, VerCetty looks to the past to imagine a better future, while celebrating underrepresented African cultural history and everyday people.

VerCetty will speak about his exhibition during an opening reception being held on Jan. 26 at 4 to 5 p.m. via Zoom. The event is free and open to the public, but registration is required.

VerCetty is also known as the co-editor of Canada’s first Afrofuturism art anthology, Cosmic Underground Northside: An Incantation of Black Canadian Speculative Discourse and Innerstandings, which features works by more than 100 Black Canadians. Through his scholarly work on Afrofuturism, VerCetty coined the terms “Sankofanology” as a lens and “Rastafuturism” as a concept.

VerCetty earned a Bachelor of Fine Arts from the Ontario College of Art and Design University and a Master of Art Education from Concordia University. His multidisciplinary artwork has been featured in Mexico, Haiti, Peru, Australia, the United Arab Emirates and Germany, among other countries.