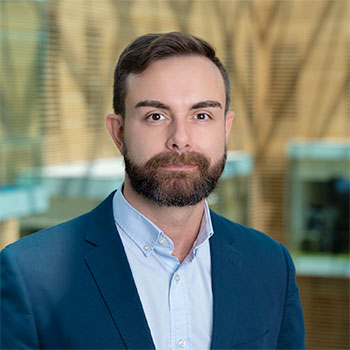 The Journal of Finance, the field’s most widely cited academic journal, presented its 2021 Dimensional Fund Advisors best paper award to Andriy Shkilko, professor of Finance at Wilfrid Laurier University. Shkilko, the Canada Research Chair in Financial Markets, shares the award with his co-author, Konstantin Sokolov, assistant professor of Finance at the University of Memphis. Sokolov is a graduate of Laurier’s Lazaridis School of Business and Economics.

Shkilko and Sokolov were recognized for their 2020 paper titled “Every Cloud Has a Silver Lining: Fast Trading, Microwave Connectivity, and Trading Costs,” which examines the effects of speed differentials on financial markets. Runners-up included scholars from Harvard University, Columbia University and the University of California, Berkeley.

“This is a huge honour – the most important prize in academic finance,” says Shkilko. “Someone described it as equivalent to winning an Oscar for best picture. I never expected to win anything like this, so it’s very humbling.”

The co-authors evaluated how markets are impacted when the fastest traders are unable to compete. Since most trading opportunities are only profitable if you are the first to get to them, speed is a pivotal factor for modern market participants. Trading is performed digitally and the time difference between the first and second traders is often mere nanoseconds.

“The big question that the industry, academia and governments have struggled with is, ‘Is this race a good thing?’ Put differently, is speed used for good or evil?” says Shkilko. “On the one hand, superior speeds may be used to provide liquidity, an important function of our markets. On the other hand, superior speeds may be used to do the opposite, thereby hurting the market.”

Among the key findings in Shkilko and Sokolov’s award-winning paper is that when the fastest traders were unavailable, there was a positive effect on markets.

“Konstantin and I used an outside shock to the system, rain, which disrupted the microwave technology used by the fastest traders to achieve those tiny speed advantages,” says Shkilko. “So in our setup, nature randomly chose to turn the fastest traders off and to later allow them to come back on. We found that when the fastest traders were off, markets were better off. Hence the title, ‘Every Cloud Has a Silver Lining.’

“We also showed that eliminating speed differentials not only helps liquidity, but also improves market welfare by allowing more investors to participate and benefit from the markets.”

Shkilko is pleased to share the best paper award with his former PhD student and feels “really proud” of what Sokolov has accomplished since graduating from Laurier in 2017.

“Congratulations to Professor Shkilko and our alumnus, Konstantin Sokolov, for this incredible distinction,” says Micheál J. Kelly, dean of the Lazaridis School. “Andriy and Konstantin join the ranks of professors from Harvard, Stanford, Wharton and Chicago Booth in winning this prize. The award speaks to the quality and impact of their work and to the strength of the Lazaridis Finance program.”

“Without the support of Laurier, the Lazaridis School and the Finance area over the past few years, I’d never be able to get anywhere near this prize,” says Shkilko. “So, in a big way, we all share it.”