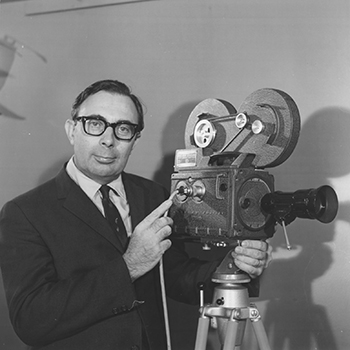 Wilfrid Laurier University is saddened by the passing of Willhelm (Willi) Nassau, who was the founding director of Audio-Visual Resources at Laurier, then known as Waterloo Lutheran University, in the 1970s and ‘80s and was awarded an honorary doctorate from Laurier in 1991. Willi passed away peacefully at home on Feb. 6, 2022 surrounded by family. He was 99 years old.

Willi joined Laurier in 1969. During his time as director of Audio-Visual Resources, he co-founded Telecollege, a ground-breaking form of distance education taught using videos mailed to students’ homes, and also helped develop and teach for the Communication and Film Studies program, which had its own professional multi-camera television studio and editing suite. He also designed a photographic darkroom, where he trained students in darkroom techniques and developed hundreds of photographs of campus that adorned the walls of offices on the Waterloo campus for decades.

While working at Laurier, he compiled a vast collection of historical photographic and technical media equipment, including hundreds of antique cameras. That collection is now shared by Ingenium, Ryerson University and Niagara College.

“Willi was a kind, friendly and enthusiastic man and a lifelong educator who never stopped learning himself,” says Carolyn Morrison, a team lead of audio-visual IT support, who worked with Nassau early in her career. “He was interested in everyone he met and eager to learn from anyone who could teach him more about the latest technologies. Willi was one of the founding members who helped build Wilfrid Laurier University.”

Willi was awarded an honorary doctorate from Laurier in 1991 for his contributions to both Laurier and the wider community, including volunteering for more than 20 years after his retirement at the Canadian Clay and Glass Gallery. In 2020, Willi was inducted into the Waterloo Region Hall of Fame (watch the video).

Willi will be deeply missed by his wife of 55 years, Hermine, brother-in-law Josef Seidl, nephews Paul Seidl (Monique) and Christopher Seidl (Diana) and son William and daughter Sara, as well as relatives and friends in Austria, where he was born. At Laurier, he will be fondly remembered by colleagues, friends and former students.

Visitation will be held at the Erb & Good Family Funeral Home, 171 King St. S., Waterloo on Feb. 15 from 2 to 4 p.m. The funeral service will take place in the funeral home chapel on Feb. 16 at 10 a.m. with interment following at Parkview Cemetery in Waterloo. For those unable to attend, a livestream will be available at erbgood.com.

To attend the visitation and service, personal face coverings are required, and relatives and friends must RSVP at erbgood.com or 519-745-8445.

In lieu of flowers, donations may be made to the Heart & Stroke Foundation or Mount Zion Lutheran Church in Waterloo and can be arranged though the funeral home at erbgood.com or 519-745-8445.