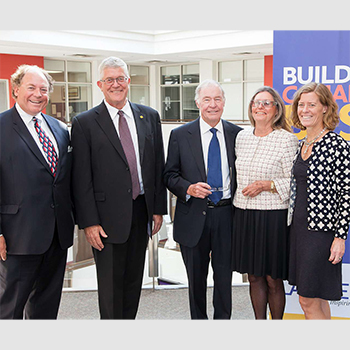 Waterloo – Waterloo Region entrepreneurs and philanthropists Margaret and Larry Marsland are the 2021 recipients of the Laurier Philanthropy Award.

The Marslands are long-time, active supporters of Wilfrid Laurier University, as well as highly engaged members of the Kitchener-Waterloo community. They have given back to Laurier in several ways, including through donations of over $1 million in support of the Laurier Start-up Fund and Lazaridis Hall, where the Marsland Family Classroom, a 150-seat classroom on the first floor, was built and named in the family's honour.

“In 2014, the Marslands were very generous donors to the creation of the Laurier Start-up Fund,” said Micheál Kelly, dean of the Lazaridis School of Business and Economics. “Students regularly name it as one of the best experiences in their undergraduate or graduate program. As of today, the Laurier Startup Fund’s internal rate of return would put its performance in the top quartile of venture funds in Canada.”

The Marsland family has deep roots in Waterloo Region. Their original family business, Marsland Radio Service, which became Marsland Engineering, was started by Larry’s father, Stanley, in 1929. Their current family business, Marsland Centre Ltd., was established in 1972 from that original business. Today, it develops and manages a portfolio of commercial and industrial buildings located mostly in Waterloo. Nearly a century later, the Marsland family continues to be a significant contributor to economic development and job creation in the Kitchener-Waterloo community.

“The Laurier Philanthropy Award is one of our most meaningful awards at Laurier, honouring those who have made a lasting impact for both Laurier students and the broader community,” said Laurier President and Vice-Chancellor Deborah MacLatchy. “Margaret, Larry and the Marsland family’s generosity have touched the lives of generations of people.”

The family has also engaged in extensive volunteerism and philanthropy in the greater Kitchener-Waterloo community.

“I heartily congratulate Margaret and Larry Marsland on this well-deserved award,” said Jason Coolman, vice-president of Advancement and External Relations. “The Marsland family has made a tremendous impact at Laurier and in our community, driving economic prosperity, nourishing the arts and supporting community wellness. We are grateful for their friendship and thrilled to honour Margaret and Larry as recipients of the Laurier Philanthropy Award in 2021.”

Due to pandemic protocols, Laurier was unable to host the annual Celebrating Philanthropy event and present the Laurier Philanthropy Award in person. Instead, the award was presented virtually this year in a small and intimate celebration on June 17.

Invitees included Margaret and Larry Marsland and their immediate family members; President and Vice-Chancellor Deborah MacLatchy; Dean of the Lazaridis School of Business and Economics Micheál Kelly; Vice-President of Advancement and External Relations Jason Coolman; Finance Professor Brian Smith; and a few Startup Fund students and alumni. The evening included informal fellowship and a formal presentation, which featured a toast and a few words from Margaret and Larry Marsland.

“Larry and I have lived in the community for a long time,” said Margaret. “We’ve watched it grow and as it grew, we grew with it, in our business. We just feel that we owe the community a great deal and we’re very fortunate that we are able to do that – and we will continue to do that. ”

“We believe in education. We need the Lazaridis School of Business and Economics. We need the kind of people it graduates,” said Larry. “We have had a measure of success in the region, through a number of generations and we’ve continually built on it, generation by generation. The region has contributed to our success and we just want to give back. We’re just absolutely blessed.”