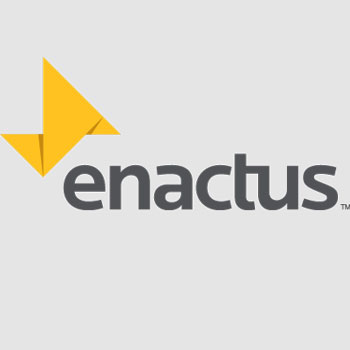 Wilfrid Laurier University’s Waterloo Enactus team, represented by four student-run ventures, was named champion in two challenges and runner-up in another at Enactus Canada’s Regional Exposition, held virtually March 12 to 19. Laurier’s team will go on to compete at the national Enactus Canada competition in May.

EarthSuds, Last20 and Smile Tabs won in their leagues at the regional competition in both the Scotiabank Climate Action Challenge and the TD Entrepreneurship Challenge. Mighty Hawks was runner-up in the CWB Financial Education Challenge. The team also won the 2021 Excellence in Innovation Award.

“I could not be more proud of the team again this year,” says Laura Allan, assistant professor in the Lazaridis School of Business and Economics and faculty advisor for Laurier’s Waterloo Enactus team. “They have kept momentum through a very difficult time and proved once again that Laurier’s Enactus team is at the top of their game. I have no doubt these students will continue to demonstrate that business can be a force for good and change the world in many positive ways.”

Laurier Enactus’s Waterloo campus team was victorious at regionals and nationals last year and went on to represent Canada at the Enactus World Cup competition. They were named runner-up at the competition after competing against teams from 32 other countries, and won the 1 Race 4 Oceans challenge, which recognizes students who are taking action to address issues facing the world’s oceans, including pollution, overfishing and climate change. More than 72,000 post-secondary students from around the world participated in regional and national competitions ahead of the global competition.

EarthSuds, created in 2017, produces single-use shampoo, conditioner and body wash tablets to eliminate the need for plastic toiletry bottles. The venture launched its e-commerce site in fall 2019 and its plastic-free toiletry products are now carried in more than 50 retail stores across North America, as well as several hotel chains.

Last20 seeks innovative and sustainable ways to upcycle plastic waste. The company is working with researchers to develop a way to replace some of the bitumen, used as a binding agent in pavement, with waste plastic bags. The resulting product is not only sustainable, but more water-resistant, stable and cost-effective than conventional pavement materials.

Smile Tabs reimagines how toothpaste is packaged, with the aim of reducing the waste from millions of plastic toothpaste tubes that end up in landfills each year. They’ve designed single-use toothpaste tablets, each encapsulated with a film that dissolves when exposed to water.

Mighty Hawks, founded in 2017, provides free life skills and employment training year-round for individuals with developmental disabilities. Participants are paired with Laurier students, who help them master a range of skills including budgeting, building a resume and communication skills.  Graduates of the program are employed in positions at EarthSuds, providing valuable on-the-job experience to transition participants to permanent work.

In May, Laurier’s Waterloo Enactus team will compete against regional winners from Western, Atlantic and Central Canada in the Scotiabank Climate Action Challenge and TD Entrepreneurship Challenge. A national winner will be chosen to represent Canada at the Enactus World Cup.