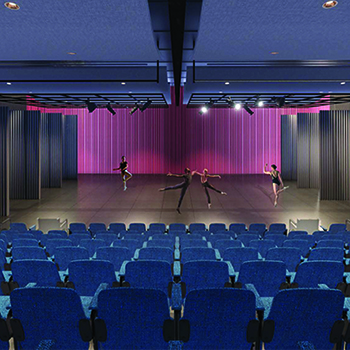 Wilfrid Laurier University unveiled conceptual plans for a Community Cultural Hub and the future of its One Market building in downtown Brantford during recent open house events attended by community members, as well as students, staff and faculty.

Laurier is incrementally transforming One Market into a series of vibrant spaces that will support continued growth at Laurier’s Brantford campus and attract community members to the city’s core. Laurier purchased One Market from the City of Brantford in 2014.

“The university has made significant investments into One Market, including refreshed public spaces, cosmetic updates, new student spaces, as well as structural and mechanical improvements,” says Tony Araujo, interim senior executive officer of Laurier’s Brantford campus. “With that work complete, we are now entering the next phase of One Market planning, turning our attention to spaces that will serve both the campus and the community and offer people more reasons to come to downtown Brantford.”

Renderings by Zeidler Architecture depict the transformation of decommissioned theatres on the upper level of One Market into a proposed Community Cultural Hub featuring a mid-sized performance space, an art house cinema and a white cube gallery. The concept plans for One Market also feature spaces for a street food market and general store.

“This project is the by-product of everyone – the City of Brantford, Laurier and the community – coming together to make this happen,” says Edward Chan, partner at Zeidler Architecture.

The mid-sized performance space would accommodate a variety of productions, from local theatre to stand-up comedy to dance recitals and address a longstanding need in the community.

The art house cinema features a 100-seat, one-screen theatre that would be programed year-round with international, independent and Canadian cinema, as well as festival hits, documentaries, mini-festivals, Hollywood classics and special series.

Laurier has established a successful track record of adaptive re-use, transforming many historic and underutilized buildings in Brantford’s core into vibrant academic, administrative and residence spaces. At 300,000 square feet, One Market is Laurier’s most ambitious adaptive reuse project to date. The university has already made significant structural and mechanical improvements, including transforming the eastern portion of the building into a student commons and classrooms.

The City of Brantford provided $150,000 from its casino legacy reserve fund to develop the architectural concepts for the Community Cultural Hub.

“Culture plays an enormous role in regenerating communities and places,” says Sara Munroe, director of economic development, tourism and cultural initiatives with the City of Brantford. “We see Brantford as having so much potential, especially downtown Brantford. I truly believe that downtown Brantford can become the cultural mecca we all want and need.”

Once home to the Brantford Farmers’ Market and formerly known as Market Square, the site of One Market was initially intended to be a publicly accessible place of mutual benefit to Indigenous peoples and settlers alike. The university is committed to honouring the legacy of the site and proceeding in a way that endeavours to restore “mutual benefit.”

“We have initiated discussions with representatives from Six Nations of the Grand River with the goal of restoring this location as a place of mutual benefit and prosperity,” says Araujo. “We do this committed to friendship, trust and respect.”

To learn more and follow along with the progress of Laurier’s One Market project visit wlu.ca/one-market.