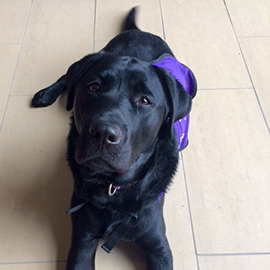 Laurier community has a passion for training service dogs

Laurier community has a passion for training service dogs

Crumbs from dog treats line all of Céline Taillefer-Travers pant pockets. The floor of her office is littered with gently chewed dog toys, and the sound of soft panting is a constant reminder of an office mate who is never very far away.

Edge, a one-year-old Labrador mix, isn’t a pet – he’s in training to become a companion for either a child with autism or a veteran suffering from Post-Traumatic Stress Disorder – and is a foster puppy with the National Service Dogs (NSD) organization.

Taillefer-Travers, an academic program assistant at Laurier’s Brantford campus, is among several foster puppy parents at the university. She decided to sign up with NSD after talking to a foster puppy parent at a mental health event.

“I had just recently lost a cat, so I was missing that connection,” she said. “I didn’t want to commit to a new animal, and this was a way to do that while also helping someone else.”

At Laurier’s Waterloo campus, Kevin Swinden, an associate dean in the Faculty of Music, and his wife are foster parents to a puppy named Viv through the Lions Foundation of Canada Dog Guides’ program. They were inspired to help by close friends who were also volunteering with the program.

“It was close friends who inspired us, but it was their 11-year-old daughter who displayed such emotional maturity when it was time to let the dog go that convinced us we could do it,” said Swinden.

Viv, a purebred black Labrador, will be with them for up to a year, and once she graduates, will be assessed for further training in one of many roles, including as a seeing-eye dog, for the hearing-impaired, for seizure response, to help children with disabilities, for autism assistance, or as a diabetic alert.

“It’s a great way to give back, and gives us a lot of pleasure,” said Swinden, who has two other pet dogs at home. “My students also enjoy seeing her, particularly when they are very stressed with school.”

All of the handlers are expected to teach the dogs some basic commands, but their key role is in socializing the pups, and often that means being out in the community where they are often inundated with questions.

Taillefer-Travers said it has been nice because she has met a lot of new people on campus. However, it can be challenging when people don’t understand how inviting their body language can be.

“They may say, ‘I’m not supposed to do this’ but then hold out their hand towards Edge,” she said. “I’ve had to learn to say, ‘I’m training right now.’”

It is not just Laurier faculty members who are enjoying training their service dogs. Roommates Katie Telfer, Christine Hansen and Jessica Anam are among several Laurier students fostering puppies.

“I find that a lot of Laurier students, when they see an opportunity (to help), they want to be a part of it as well,” said Telfer. “And it’s really amazing to see so many students interested in helping other people, as well as being a part of this experience in and of itself, like raising a dog, owning a puppy with your roommates, or by yourself. It’s really amazing.”

While they are teaching eight-month-old Mocha how to behave, she is teaching them the importance of prioritizing.

“I think it teaches us not only responsibility, because you’re taking care of a living thing, but also prioritization because you have schoolwork, you have (Mocha), some of us have jobs, so just time management,” said Anam. “A lot of skills have come into play.”

The students say they will be sad when they have to say goodbye to Mocha, but they are prepared. Taillefer-Travers is also preparing for the day when Edge is paired with a family, but hopes to keep in touch with them over social media.

“I think it will be harder for my husband because I’m the boss – I have to keep an emotional distance from the dog. But when we come home, the two of them just hang out,” she said.

Swinden said people often tell him they would never be able to foster a service a dog because it would be too hard to give up the dog at the end of the program.

“We all need to learn how to be faced with difficulties,” he said. “We all love and lose, and we are better for it.”