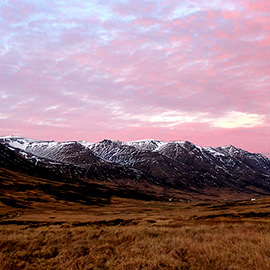 Art’s subjectivity — particularly that of photography — and its ability to spur conversation plays a major role in the research and teaching of Sara Matthews, associate professor in the Department of Global Studies at Laurier.

Matthews recently returned from Ólafsfjörður, Iceland, where she participated in the Listhus Artist Residency Program for the second straight year.

The residency, which provides a collaborative environment for artists who are inspired by nature, was an opportunity for Matthews to refine the methodology she will apply to a new Social Sciences and Humanities Research Council funded research project on youth and surveillance she is undertaking in collaboration with artists and scholars in Toronto.

Matthews’ research and teaching at Laurier are interdisciplinary and consider the dynamics of violence, war and social conflict in the global context. She curates visual projects on dimensions of war and social trauma, and has written about art in several publications.

Using photography in teaching and research is something Matthews has been thinking and writing about for years. “Unlike some other forms of contemporary art that might feel alienating, photography and visual images are accessible because they have become a part of people's everyday lives,” says Matthews. “People might be reluctant to talk about their own experience in a traditional interview, but dialogue can happen when people go out to take photographs and interpret what they see.”

An assignment in Matthews’ fourth-year Narratives of/about Violence class requires students to take photos. But she is not necessarily interested in what her students’ photographs depict.

“I’m more concerned with what the photographs represent about my students’ own process of thinking,” she says. “I want them to understand that aesthetics can represent something other than an object. Photographs can represent a process, experience or a way of coming to know something.”

It’s this type of interpretation — heightened through conversation and collaboration — that Matthews continues to explore and utilize in her work.

“I thought photography, because it’s so open to interpretation, would allow for conversation,” says Matthews.

When she spent five weeks in Ólafsfjörður last year, Matthews began experimenting with her own photography. She was interested in exploring globalization’s contribution to conflict at the social and family level, specifically over the collapse of Iceland’s fishing industry.

Matthews decided her approach would be to walk with local collaborators through Iceland’s vast landscape, which she says became the focus of her project during her second residency in Ólafsfjörður.

“I realized that the issue wasn’t the collapse of the fishing industry,” says Matthews. “The real issue is the massive tourism that’s occurring and how that has changed peoples’ social lives, the work they do and their relationship with the land.”

While in Iceland, Matthews could have conducted research interviews or archival work, but she was interested in how art creates a conversation with an emotional context and a richer description of one’s experience. She wanted to capture local stories and narratives.

“I thought photography, because it’s so open to interpretation, would allow for conversation,” says Matthews.

By walking and taking photographs, Matthews had research-oriented conversations that challenged some of the power dynamics inherent to traditional research interviews.

Her work in Ólafsfjörður, which focused on her own aesthetic creativity rather than the social science research methods she’s trained in, involved taking some risks. But it also created more open and less directed relationships between Matthews and her research subjects.

She points out the important distinction between the aesthetic rigour in what artists create versus her photography in Iceland. Because Matthews typically works with professional artists, creating her own work was a departure. This difference was reflected in the decisions the she and her collaborator made in showing the work publicly.

“Rather than a gallery setting, we chose to exhibit our project at a local coffee shop in Ólafsfjörður, which is an important community hub in the small town of 800 residents. It certainly created conversation,” says Matthews. “The images functioned as ‘transitional objects’ — something that helps create conversation and helps people mitigate the reality of their emotional world against the reality of the outside world with all of its demands.”

Matthews, who thanks Laurier and the Faculty of Arts for their support of her residency, looks forward to applying the insight she gained from her research methodology in Iceland — balancing the relationship between researcher and community while breaking down the power dynamics of the process.

The photo used in this story is by Ingi Þór Reyndal, who has worked as an offset printer, sailor, and teacher. He’s currently a poet, lyricist and photographer living in Ólafsfjörður, and collaborated with Matthews during her residency in Iceland. Reyndal’s poem, translated from Icelandic, accompanies the image:

When spring wakes up to life,
In the ground
The world is shining, all around.
New life, new flesh
Rises up with love in hearts.