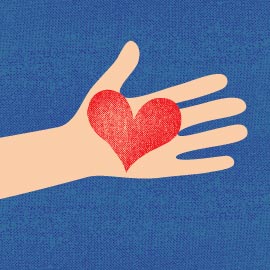 Most Canadians give to charity – their support for the arts, education, health care and much more provides essential services that enrich the quality of life for all citizens.

But what motivates people to donate? Arguably, an even more important question for charitable organizations is why don’t people donate?

With November 29 marking Giving Tuesday, an annual day to give back, Justin Smith, associate professor of Economics in Wilfrid Laurier University’s Lazaridis School of Business and Economics, shares his expertise on donor behaviour and the social context of giving.

“Charity is very important for the economy,” said Smith. “Many factors drive the decision to donate to charity and how much to give. Understanding what influences giving can provide a clearer picture for organizations about why they might not be succeeding or for funding bodies to make strategic decisions.”

Smith has recently published two studies focused on how the people around us determine how we give.

His research led him to two conclusions: people donate less the more ethnically mixed their neighbourhood is; and, the greater the income inequality in a neighbourhood, the more people give.

In Smith’s paper, “Diversity and donations: The effect of religious and ethnic diversity on charitable giving,” published in the Journal of Economic Behavior & Organization, he explores the effects of local ethnic and religious diversity on private donations to charity using data from the Canadian census.

On average, he found that charitable giving was sensitive to the demographic composition of a community. An increase in neighbourhood diversity led to a decline in private donations to charity. The average donation per adult in the research sample dropped by 15 percent for each 10 percent increase in likelihood that people in the neighbourhood come from different ethnic groups.

He also found that religious diversity might contribute to lower donations. The study found a negative relationship between religious heterogeneity and amount donated, but the findings were less precise and less robust than the estimates based on ethnic diversity.

Smith’s second study, “Does income inequality increase charitable giving?” in the Canadian Journal of Economics, explored the impact of income distribution in a neighbourhood to charitable giving.

“The income distribution in Canada has been changing over the last twenty years,” said Smith. “A higher proportion of income is being reported by those in the top one per cent. Charitable giving is sensitive to economic circumstances, so it’s important to understand how income-distribution shifts will impact charities.”

Smith’s study showed that rising inequality in income at the local level is associated with a small increase in charitable donations. The effect on donations is smaller in areas with high levels of inequality at both neighbourhood and municipality levels.

Interestingly, over the same period of time as the study, the share of gifts to charities that provide welfare, education, health and “other” services increased at the expense of gifts to religious charities.

“Our findings imply that people may try to counteract widening income distribution by donating to more redistributive charity,” said Smith.

Smith says there is still much to discover about how our surroundings influence charitable giving. His next research project will examine the tax benefit of giving and how to determine the optimal tax refund to increasing charitable donations.