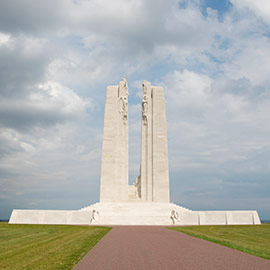 On November 11, communities across Canada will gather at Cenotaphs for Remembrance Day — an occasion to honour the men and women who served and those who lost their lives in war.

There are more than 7,500 war memorials and monuments throughout the country, many of which are visited daily by Canadian residents and visitors. Why do Canadians, then, feel compelled to travel to memorials and sites of importance in Europe — the front lines where millions of soldiers lost their lives during the First and Second World Wars?

Katrina Pasierbek, a first-year PhD student in Laurier’s History Department, is digging deeper into the evolution of these Canadian pilgrimages.

She is exploring First World War tourism and commemoration on the Western Front — particularly, the earliest forms of Canadian remembrance that took place during the interwar period, before the Second World War once again ravaged Europe.

“The Vimy Pilgrimage serves as an important case study to further our understanding of First World War commemoration and tourism. What else can we learn about this experience based on the priorities and plans of those who made the journey back to Europe?”

“Every year, we take undergraduate and graduate students to France and Belgium to visit the battlefields of the First and Second World Wars, so we too are part of the long tradition that Katrina is studying,” says Mark Humphries, director of the Laurier Centre for Military Strategic and Disarmament Studies, associate history professor, and Pasierbek’s PhD supervisor.

Humphries, who is also the Dunkley Chair in War and the Canadian Experience, says that while it is important for students to learn about Canada’s military history, Pasierbek’s work shows that it is important to reflect on the unique nature of experiential learning and the ways in which those tactile experiences shape memory.

“I’ve always been surrounded by history and stories of events that still shape our lives today — my father is a history teacher and both of my grandfathers fought in the Second World War,” says Pasierbek. “I knew I wanted to study history in university.”

In the final year of her undergraduate studies, Pasierbek was selected by the Canadian Battlefields Foundation to participate in a study tour — a 15-day journey guided by the work of historian Terry Copp, director emeritus of LCMSDS and professor emeritus of History.

“When I was on the tour, one of the guides thought we would want to go to a specific site because it’s where Canadian veterans visited in the 1920s and 1930s after the First World War,” says Pasierbek. “And then it struck me — people fought here and their friends died here. Why do they actually want to come back?”

The question began Pasierbek’s mission to learn more about this Canadian interwar remembrance and pilgrimage to the front lines, but she found very limited research on the topic. She is now piecing together a bigger historical picture based on the experiences of individuals, families, veterans and organized group trips.

In 1936, nearly 6,200 Canadian veterans, bereaved parents, and civilians travelled to northern France for the highly anticipated unveiling of the Canadian National Vimy Memorial.

The memorial, which was designed by Canadian sculptor and architect Walter Seymour Allward and took 11 years to construct, is inscribed with the names of 11,825 Canadian soldiers who were missing or presumed dead in France during the First World War.

Following the official dedication of the monument by King Edward VIII, Canadian pilgrims spent several days paying their respects in the cemeteries where Canada’s war dead were buried in France, and many continued on to Ypres, Belgium to witness the Last Post ceremony at the Menin Gate Memorial.

“The Canadian National Vimy Memorial, along with seven other memorials erected by the Canadian Battlefields Memorials Commission, quickly transformed into destinations for tourists to visit during their European holidays,” says Pasierbek. “The Vimy Pilgrimage serves as an important case study to further our understanding of First World War commemoration and tourism. What else can we learn about this experience based on the priorities and plans of those who made the journey back to Europe?”

Both Humphries and Pasierbek agree that understanding why veterans returned to the battlefields helps better understand war's legacy in Canada.

Interested in learning more about Canada’s history in the First and Second World Wars? Find out more, including information on study tours, through the Laurier Centre for Military Strategic and Disarmament Studies.