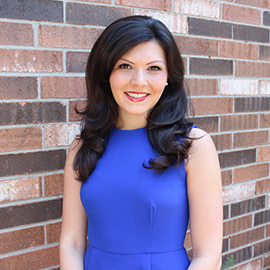 Since she was a child, Rachel Schoutsen (BA ’13) dreamed of being a television broadcaster. When she was in Grade 4, Schoutsen's teacher nicknamed her Oprah Winfrey because she couldn’t keep quiet during lessons — which sparked her interest in a television career.

Schoutsen continued her dream and in 2013 graduated from Laurier's Digital Media and Journalism program. Today she is a traffic and weather reporter for The Weather Network.

“I like traffic and weather because people always need this information,” said Schoutsen. “Traffic is fun to report because its constantly changing, and I’ve learned so much about Ontario roads that I’m now my own GPS!”

Schoutsen is grateful to her mentor, Sue Ferguson, an associate professor of Digital Media and Journalism at Laurier's Brantford campus, who left quite an impression on her. In one of Schoutsen's very first lectures, Ferguson told the class that if they really wanted to get into this industry they should start volunteering at broadcast stations. Following her professor's advice, Schoutsen contacted a producer at Rogers TV Brantford. This opportunity helped her gain the experience she needed to land her dream job.