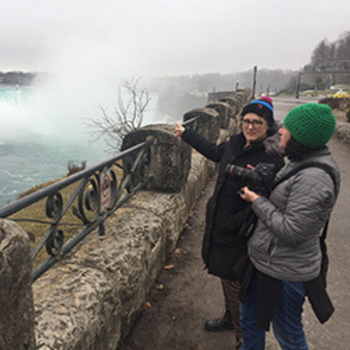 WATERLOO – A documentary about the journeys of American war resisters fleeing to Canada to avoid U.S.-led conflict in Vietnam, Iraq and Afghanistan will get its first non-festival screening in Waterloo and Toronto later this month.

Safe Haven is an 80-minute documentary by U.S.-based filmmaker Lisa Molomot and Alison Mountz, a Laurier professor in Geography as well as Laurier Research Chair in Global Migration. They have teamed up with alumnus Shiva Mohan (PhD, ’21) to present the film at 7 p.m. on Sept. 28 at the CIGI Auditorium in Waterloo, and at 7 p.m. on Sept. 29 at the Revue Cinema in Toronto. Both screenings will be followed by Q&As with the film collaborators and some of the film’s subjects.

The war resisters represent two generations of Americans who headed north to Canada to flee war.

“So many people were offered safe haven in Canada during the war in Vietnam, but most of the resisters who came more recently were turned down,” said Mountz. “The film follows the different experiences of people who migrated and also the social movements that arose in Canada and across the border to support their resistance to war.”

In 2020, Mountz and Molomot began showing Safe Haven at film festivals across North America, but their promotional plans were put on hold due to the COVID-19 pandemic. However, Safe Haven has been picked up by New Day Films, a distribution collective founded by women filmmakers. The film will be available through New Day and the video-on-demand platform Kanopy, and will continue to show at festivals across the U.S.

Leah Main, who fled north with her husband so he could avoid being sent to war in Vietnam, arrived in Canada in 1967. She said the reasons they came centred around safety and integrity.

“Safety for my draft-eligible husband whose conscientious objector application had been denied. Safety for myself as I was actively helping men to resist or refuse the draft. Safety for any male children I might ever have. Integrity in not participating in a vile war; integrity in sensing a direction the country was heading that I could not support. I have never, for even a moment, regretted the move,” said Main.

Dean Walcott, a war resister who did two tours in Iraq as a U.S. Marine before fleeing to Canada, said he hopes the documentary can serve as a warning to our elected leaders.

“When you declare war on some place, or on some people, you had better make sure you know what you're sending your sons and daughters into,” said Walcott.

“As war continues around the globe, the question of what roles governments will play in relation to these wars is crucial,” said Mountz. “Will they participate? Will they provide safe haven? Our film shows that these roles change historically and can never be taken for granted, making this a timely resource and platform for dialogue.”

The screenings and Q&As were funded by a workshop grant from the Balsillie School of International Affairs.

Tickets for the Toronto event can be purchased online.