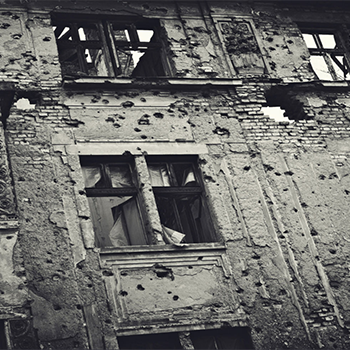 New book by Laurier researchers explores domicide, the intentional destruction of homes in the context of war

New book by Laurier researchers explores domicide, the intentional destruction of homes in the context of war

WATERLOO – In their new book, From Bureaucracy to Bullets: Extreme Domicide and the Right to Home, Wilfrid Laurier University researchers Bree Akesson and Andrew R. Basso explore the concept of extreme domicide, or the intentional destruction of home as a result of political violence.

“The impact of domicide on everyday civilians has been highlighted in the current Russian invasion of Ukraine, as countless news reports have shown Ukrainians mourning the destruction of their homes,” said Akesson. “This loss can be one of the deepest wounds to one’s sense of self. Not only is the physical structure of the home destroyed, but past memories, a present sense of security and stability, and dreams for the future are also lost.”

Akesson and Basso also detail the serious biological, psychological and social impacts of domicide, including increased rates of depression and anxiety, and decreased educational achievement for children.

Akesson, the Canada Research Chair in Global Adversity and Wellbeing and the associate director of Laurier’s Centre for Research on Security Practices, became interested in domicide in 2005 while working in Chechnya and Ingushetia at the end of the second Chechen war. She visited Chechens displaced by the war who were seeking shelter in abandoned factories, empty school buses and garden sheds. Subsequent research trips to war zones in northern Uganda, Palestine, Lebanon and Afghanistan inspired Akesson to study what happens when homes are intentionally destroyed in the context of war.

From Bureaucracy to Bullets was written to bring attention to past and current instances of domicide in the hope that domicide will be recognized as a human rights violation and criminalized under international law.

“We deliberately use the term ‘domicide,’ rather than related terms such as ‘home demolition’ or ‘home loss,’ to reinforce that the house was intentionally ‘killed,’” said Akesson. “It echoes other forms of international crimes, such as genocide.”

“Domicide is a human rights violation on its own and can be a cooperative process with other crimes like genocide,” said Basso, a researcher affiliated with the Laurier Institute for the Study of Public Opinion and Policy. “We believe that the most powerful way of defending the human right to home is to draft and pass a single piece of international law which bans the practice of domicide in all spaces and times, and establishes a clear criminal justice regime for perpetrators who violate the right to home.”