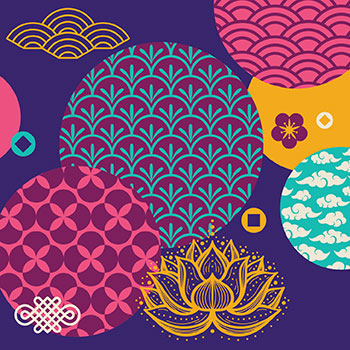 Asian Heritage Month is held annually in May in Canada to celebrate and honour the experiences of Asian Canadians. Wilfrid Laurier University has several experts in Asian and Asian-Canadian studies. Scholars at Laurier focus on the diverse and complex lived experiences and identities of Asian and Asian-Canadian communities. Their work address questions of migration, diaspora, gender, labour, citizenship, inequality, colonialism, local and transnational history, philosophy, literature, religion and more.

Blaine Chiasson is an associate professor of History. He is an expert on Modern Chinese history, the history of Beijing and Tianjin’s military occupation (1900-1902) and Russian émigré history. Chiasson’s research areas include Manchurian history and the history of colonization of Manchuria by the Chinese and the Chinese state. He also works on Chinese urban history and he is currently preparing a monograph on the post Boxer Rebellion occupation of northern China. Contact: bchiasson@wlu.ca

Christina Han is an associate professor of History. She is an expert on cultural and intellectual developments in East Asia. Han is a curator of East Asian culture and art at Laurier Brantford and serves as the vice president of the Canadian Industrial Heritage Centre. Her research interests include art, literature and cultural history of East Asia, digital humanities and game studies. Contact: chan@wlu.ca

Jason Neelis is an associate professor in Laurier’s Department of Religion and Culture. He is an expert on South Asian religions, history, literature and languages. Neelis’s research interests extend broadly to dynamic interactions between South Asian religions (including Hinduism and Jainism), transregional connections and movements across Asia via overland and maritime networks, and the role of cultural and religious catalysts in the past and present. Contact: jneelis@wlu.ca

Sandra Annett is an associate professor of Film Studies. She is an expert on digital and new media studies, animated film and Japanese film. Annett’s research focuses on the ways in which visual media technologies, from celluloid film to social networking, affect how audiences understand visual images, create their own works, and use media to connect with others. Contact: sannett@wlu.ca

Jing Jing Chang is an associate professor of Film Studies. She is an expert on modern Chinese cinemas, Cold War and film, and gender and sexuality in film. Chang’s research interests include modern China, Chinese cinemas, postcolonial studies, gender and sexuality in film, and the Cold War era. Her most recent book uses multi-media archival resources and films to narrate the complexity of social change and political turmoil in postwar Hong Kong. Contact: jchang@wlu.ca

Philippa Gates is a professor of Film Studies. She is an expert on American film history in terms of its representation of gender, race, ethnicity and age in genre films. Gates is the author of Criminalization/Assimilation: Chinese/Americans and Chinatowns in Classical Hollywood Film and co-editor of Transnational Asian Identities in Pan-Pacific Cinemas. Her current research project focuses on the representation of Asian Americans in Classical Hollywood westerns. Contact: pgates@wlu.ca

Mariam Pirbhai is a professor in Laurier’s Department of English and Film Studies. She is an expert on Caribbean and South Asian diasporas, transnational and indentured labour, and creative writing. Pirbhai’s research interests include South Asian and Caribbean literature, postcolonial studies, postcolonial women’s writing, migration, multiculturalism and diaspora. Contact: mpirbhai@wlu.ca

Eleanor Ty is a professor in Laurier’s Department of English and Film Studies. She is an expert on Asian Americans and Asian Canadians and the ways their novels, films, graphic narratives and memoirs represent their diasporic identities. Ty’s research topics includes memory, invisibility, globalization, second-generation immigrants and failure. Contact: ety@wlu.ca

Asian Experience in the Diaspora

Sheri Lynn Gibbings is an adjunct professor in Laurier’s Department of Global Studies. Her research focuses on urban issues in Indonesia and explores a number of themes including urban informal economies; urban transformations in post-authoritarian cities; and sovereignty, citizenship, and political organization. Contact: sgibbings@wlu.ca

Maryam Khan is an assistant Professor in the Faculty of Social Work. Her research examines the resistance strategies and agency of LGBTQ Muslim women living out their intersectional identities in the Global North amongst the hegemonic norms existing in both normative Muslim and LGBTQ communities. Khan’s areas of expertise include the exploration and critical analysis of South Asian feminisms in Canada, community-based research, community development and clinical counselling. Contact: mkhan@wlu.ca

Ashwani Kumar Peetush is an associate professor in Laurier’s Department of Philosophy. He focuses on human rights, democracy and global justice, and his work explores approaches to creating meaningful grassroots intercultural dialogue between diverse communities and peoples. Peetush is also interested in classical Indian philosophy and Sanskrit studies and focuses on the metaphysics of the self and consciousness in Advaita Vedanta and Buddhism. Contact: apeetush@wlu.ca

Anh Ngo is an assistant professor in the Faculty of Social Work. She is an expert on the experiences of immigrants and refugees in Canada at the community level; social policy as knowledge production and its effects on the lived experiences of individuals and groups; critical multiculturalism and critical refugee studies; and social change through community action and engaged scholarship. Ngo’s work has approached these questions through the lens of Vietnamese Canadians in Ontario. Contact: ango@wlu.ca

Margaret Walton-Roberts is a professor of Geography and Environmental Studies. She is an expert on immigration, gender and diaspora. Walton-Roberts' current research focuses on gender and the international migration of health-care professionals and students, examining global nurse migration pathways between India and Canada, Philippines and Singapore, and Vietnam and Germany. Contact: mwaltonroberts@wlu.ca