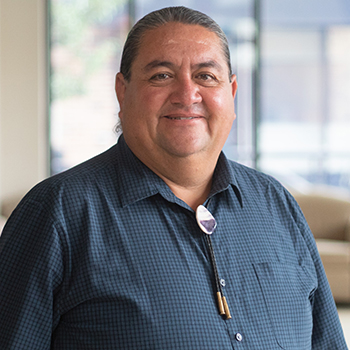 “I am honoured to be given the opportunity to serve the Laurier community in this inaugural role,” said Thomas. “As a member of the Haudenosaunee along the Grand River, I look forward to representing and supporting Indigenous and allied students, staff and faculty in our collective efforts to ensure a safe, respectful and honourable environment for us all to work and learn together.”

As the most senior Indigenous leader at Laurier, Thomas will provide strategic advice, support and expertise to academic and administrative units across the institution to achieve goals related to Indigeneity, including creating an environment of cultural safety for Indigenous faculty, staff, students and visitors. He will also further engage and strengthen partnerships with Indigenous communities.

“Developing an institution-wide Indigenization strategy is the next step in Laurier’s commitment to more fully integrating Indigenous knowledges and practices into our university,” said Laurier President and Vice-Chancellor Deborah MacLatchy. “I am thrilled that Dr. Thomas will be taking on this important leadership role and will become a member of the President’s Cabinet. For more than a decade he has been a well-respected and valued member of our university. In that time, he has made significant contributions to scholarship, curriculum development, teaching, mentoring and community partnerships.”

Thomas began working at Laurier in 2006 as the coordinator of community service-learning. Since then, he has held positions as an Indigenous Studies liaison officer and the university’s Aboriginal scholar in residence. Thomas is currently a tenured, full-time faculty member in Laurier’s Faculty of Liberal Arts, which he joined in 2017. Thomas completed his Doctor of Philosophy in Community Psychology at Laurier in 2020. Previously, he completed Master of Arts and Bachelor of Science degrees at Laurier. As a researcher, Thomas focuses on Indigenous rights, resource governance and self-determination. Following the release of the 2015 Truth and Reconciliation Commission’s 94 Calls to Action, he has worked in the educational, health care, and child welfare sectors to support efforts to improve services as they work towards reconciliation and Indigenization. Last year, he was honoured as a Six Nations Community Treasure by Six Nations of the Grand River in recognition of his exemplary efforts to make the community a safer, happier and healthier place to live.

Among the priorities of the associate vice-president of Indigenous Initiatives will be guiding the development of a university-wide Indigenization strategy, a core initiative in Laurier’s Action Plan for Equity, Diversity, Inclusion (EDI) and Indigeneity. The relationship between EDI and Indigeneity at Laurier has been formed in the spirit of the Two Row Wampum. EDI and Indigeneity initiatives are moving forward side by side, down the same path, in pursuit of partnership and creating an inclusive, welcoming and just community.

“I am extremely delighted that Dr. Darren Thomas will be the inaugural associate vice-president of Indigenous Initiatives,” said Anthony Vannelli, provost and vice-president: academic. “Darren brings tremendous experience, knowledge and wisdom to this new role. Darren will also help cultivate the development of a strong collective leadership approach where we work together to bring all communities and different visions to a place where challenges and walls are replaced by bridges to understanding and a shared direction.”

“Although efforts to reconcile historic wrongs have only recently begun by governments and institutions in Canada, Indigenous and settler societies have been attempting to reconcile our differences since the Two Row Wampum Belt Treaty in 1613,” said Thomas. “This treaty agreement codified Haudenosaunee law with the Dutch, French and British crowns and, despite our differences, our ancestors believed we could construct a relationship of co-existence as long as we held to the principles of trust, friendship and respect.”

Thomas will formally begin in the role of associate vice-president of Indigenous Initiatives on July 1, 2021.