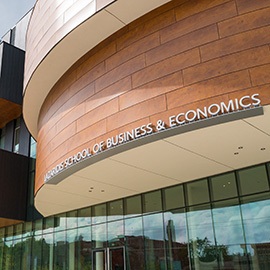 WATERLOO – Lazaridis ScaleUp program companies have surpassed $1 billion in new capital raised. The milestone represents the collective achievements of 62 participating companies since the program began in 2016 at the Lazaridis Institute for the Management of Technology Enterprises at Wilfrid Laurier University.

“The Lazaridis Institute is unequivocally and emphatically fulfilling its mission,” said Micheál Kelly, dean of the Lazaridis School of Business and Economics. “We set out to increase Canada’s prosperity by helping Canadian tech entrepreneurs scale and compete internationally. One billion dollars in funding represents a lot of scaling.”

The Lazaridis Institute was established in 2015 with the generous support of Mike Lazaridis and the Ontario government. The Lazaridis ScaleUp program was launched in 2016 to help high-potential Canadian companies transition from founder-led organizations to scalable businesses that can successfully compete in global markets. Lazaridis ScaleUp is a non-profit and does not charge fees or take equity from participating companies.

“We’re honoured to work with these brilliant and ambitious companies,” said Kim Morouney, managing director of the Lazaridis Institute. “More than $1 billion in investment in under five years is a strong indication that Canadian scale-ups, with the right support, have the ability to successfully compete anywhere in the world.”

Morouney points to recent policy research from the Munk School of Global Affairs and Public Policy that argues government should prioritize scale-ups as the most effective way to increase productivity, support job growth and bolster post-pandemic economic recovery.

“Canada has a vital ecosystem for startups and unlimited potential,” said Morouney. “But when startups hit the critical inflection point – when growth rates double, and double again – the support they need has traditionally been much harder to find. Lazaridis ScaleUp addresses that gap by connecting founders with experienced mentors who can help them build the systems and structures they need to sustain rapid growth. With access to our network of experts, Lazaridis ScaleUp companies are showing that they can expand and succeed globally without having to relocate outside of Canada.”

About the Lazaridis Institute

Housed in the Lazaridis School of Business and Economics at Wilfrid Laurier University in Waterloo, Canada, the Lazaridis Institute combines scholarly research, real-world market analysis and industry best practices to identify obstacles to global competitiveness and optimize the management of high-growth technology companies. The Lazaridis ScaleUp program is sponsored by Borden Ladner Gervais, Boast.AI and Deloitte.

Lazaridis Institute for the Management of Technology Enterprises