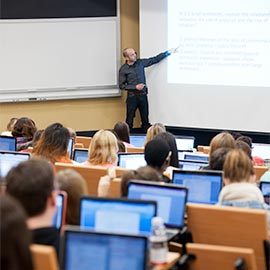 Johnson’s research reveals no evidence to support the argument that paying teachers higher wages is associated with better student performance.

“Teacher salaries must be attractive enough to draw talented people into the profession,” said Johnson. “But is there evidence on how much is enough?”

Johnson’s study indicates that there is no clear relationship between province-wide student assessment results and relative teacher pay in Canada’s six largest provinces. For example, British Columbia, which tends to have the lowest-paid teachers, also tends to have somewhat better standardized test results than other provinces. On the other hand, Manitoba, while paying some of the highest salaries, has the lowest mathematics, reading and science scores.

The results of the study imply that provinces that are home to relatively well-compensated teachers would appear to have negotiating room to limit the growth of teacher compensation relative to other occupations without impacting student results.

Johnson says it is unrealistic to expect that such a compensation change could occur quickly. Relative salaries could be reduced gradually by having a series of wage settlements where increases are less than the rate of inflation. To emulate the pension rules in British Columbia, pension generosity in other provinces could also be adjusted gradually.

“With education costs being the second-largest spending item in provincial budgets behind healthcare, other provincial policymakers could pay close attention to the British Columbia example where BC taxpayers seem to be getting better value for money from the salaries earned by BC teachers,” said Johnson.