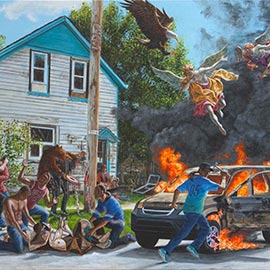 Well known for his unique interpretations of romantic North American landscapes, Monkman’s work has been exhibited around the world and is widely represented in major museums across Canada and the United States. In “Urban Res Studies,” Monkman departs from his lavish backdrops of North American landscapes inspired by the nineteenth-century works of Albert Bierstadt, and seduces viewers into the raw, dilapidated urban environment of the North End of Winnipeg.

This impoverished terrain is reminiscent of inner-city neighbourhoods across North America where young Aboriginal populations have been marginalized into a revolving cycle of social dysfunction. Within this landscape, Monkman presents an eccentric cast of characters – ranging from tattooed Renaissance angels and First Nations people posing as gangbangers and protectors to historical art cameos from Pablo Picasso, Francis Bacon, and Henry Moore – which speaks directly to the cultural displacement and remix of the Indigenous experience.

The exhibition catalogue features literary vignettes by award-winning author Joseph Boyden that echo the intimacy and intensity of Monkman’s paintings, as well as a critical essay by Professor Anne Brydon that speaks to the empowerment of the Aboriginal voice.

Located in the John Aird Centre on Laurier’s Waterloo campus, the Robert Langen Art Gallery is open Wednesday-Saturday, noon - 5 p.m. Admission to the gallery is free of charge.

The Robert Langen Art Gallery has played a vital role at Wilfrid Laurier University’s Waterloo campus since it opened in 1989. As Laurier’s visual arts centre, the Robert Langen Art Gallery provides knowledge, stewardship, appreciation and enjoyment of Canadian art and culture to members of the Laurier community and beyond. The gallery’s annual programming complements concepts and theories in Laurier’s academic curriculum and integrates community outreach initiatives as related to the visual arts.