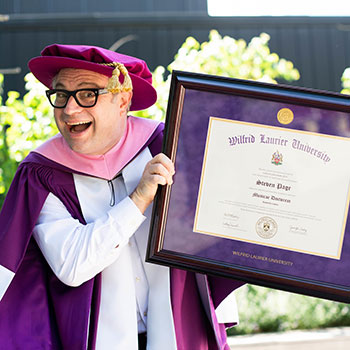 It is an honour to present to convocation Steven Page, one of the leading musical voices in Canada and beyond. Mr. Page is a highly accomplished composer, singer and sought-after contributor in a variety of public areas.

Years ago, I was asked to be the musical director for a production of Oliver for a prestigious community theatre. Auditions were held for the role of “orphans” and among the mob was a confident young 12-year-old who came to me and introduced himself — “Hi, I’m Steven Page.” His acting-singing career was launched! He subsequently sang in the Toronto Mendelssohn Youth Choir, the Scarborough Schools Youth Choir and, for a short stint, I had the privilege of conducting him in the Bell’Arte Singers.

As an administrator in the former Scarborough Board of Education, I had a front row seat to watch the formation of the popular band Barenaked Ladies. Their evolution as a bunch of really smart, nerdy popstars happened in no small part at the Scarborough Board Music Camp, where Steven was a camper, mentor and junior administrator. I’ll never forget that during one morning canoe ride, while discussing our love of bagels, I mentioned I loved smoked salmon and cream cheese. Steven sternly rebuked me — “we don’t mix our dairy and seafood.” I still think of that conversation when I enjoy salmon and cheese on a Montreal bagel. Sorry, Steven.

The Barenaked Ladies songbook was on the playlists and ringing in the ears of almost everyone after the album Gordon was released in July 1992. Steven had songwriter credits on almost all of the songs. He built a recording studio in his farmhouse outside of Toronto that became a creative retreat where many well-known BNL songs were written and recorded. Steven left the band in 2009 to embark on a solo career and to pursue other creative interests. In 2018, the band was briefly reunited to be inducted into the Canadian Music Hall of Fame.

Page composed original music for Bartholomew Fair: A Comedy for the Stratford Festival, which was performed during the summer of 2009. There have been other Stratford Festival commissions. He also records and performs with the contemporary music group Art of Time Ensemble. He sang in performances of the Beatles’ Abbey Road and Sgt. Pepper’s in semi-classical arrangements with the Art of Time, among other programs. He maintains a distinct solo career, livestreaming regular concerts from his home studio during the COVID-19 pandemic. He is once again on the festival circuit this summer.

Mr. Page has been an avid member of the New Democratic Party and a notable supporter of the late Jack Layton. He performed Leonard Cohen’s Hallelujah at Layton’s funeral, which was televised globally from Toronto’s Roy Thomson Hall. He has since remarked that was one of his toughest gigs ever.

In addition, Page has served as a member of the board of directors for the World Wildlife Fund and he was a member of the WindShare co-op that owns the wind turbine in downtown Toronto. In 2013, Page made a cameo appearance on the sitcom How I Met Your Mother. He has also been a contestant on the game show Bumper Stumpers and won the first edition of CBC’s Canada Reads, defending In the Skin of a Lion by Michael Ondaatje.

We are indeed very privileged to have Steven Page as a member of our Laurier community. His generosity and accessibility have enriched our faculty and students over the years. And we continue to be huge fans of his musical accomplishments and consistent activist voice.

Madam Chancellor, I am instructed by the Senate of the university to request that you admit Steven Page to the degree of Doctor of Music, honoris causa.