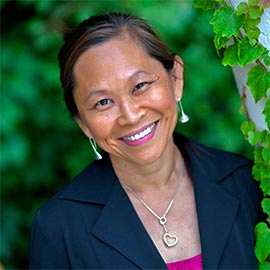 Wilfrid Laurier University English and Film Studies Professor Eleanor Ty has been named Laurier’s 2015-16 University Research Professor. The announcement will be made at fall convocation and she is being highlighted during Ontario Research Week.

“This award means a lot to me,” said Ty. “It makes me feel that the many years of reading, researching and sitting in front of the computer have been worth it.”

Ty has spent her career studying Asian North American literature and film and 18th-century British literature. She has published 10 books in three different areas of study. Canadian Literature and Cultural Memory (Oxford University Press, 2014), her book co-edited with Cynthia Sugars, has been described as “a monumental achievement” by Cecily Devereux, University of Alberta.

Before 2000, Ty established herself solidly in the field of 18th-century British literature with her groundbreaking examinations of women novelists of the 1790s. She was also the editor of new editions of two novels by 18th-century author Mary Hays that were previously out of print.

Ty will use the award to visit a major research library with strong holdings on Asian American and ethnic studies, and to complete her book project titled #Asianfail: Precarity, Failure Unhappiness and 21st Century Asian American Narratives.

“It is wonderful and important that we have these awards that recognize research excellence at Laurier,” said Ty. “Our university values, encourages, and rewards scholarly achievement.”

The University Research Professor award was created to recognize a continuous record of outstanding scholarship by a full-time Laurier faculty member and to enable that scholar to complete a major piece of research. The award emphasizes the importance of research at Laurier and promotes the achievements of the university’s outstanding scholars. The University Research Professor award provides a $10,000 research grant and two course remissions for the year. The award is given each year at fall convocation with a citation.