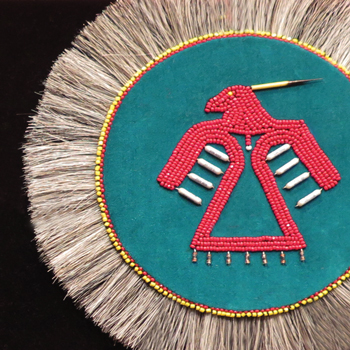 Coalesce is a fusion of distinct Anishinaabeg aesthetics of the Great Lakes’ region with the refuse from western society’s technological and digital age – to intentionally shift an object’s materiality and its accepted paradigm within the physical world. It is through the integration and juxtaposition of recognizable materials used in the making of Anishinaabeg material culture, such as glass beads or porcupine quills, with new found materials, such as electronic components (capacitors and resistors) that this body of work rejects any notion of cultural status. Coalesce demonstrates the continuum of Anishinaabeg innovation and expression by making use of disparate materials that knowingly coalesce and segue seamlessly into contemporary Anishinaabeg artistic tradition and material culture.

Barry Ace is a band member of M’Chigeeng First Nation, Manitoulin Island, Ontario. His mixed media paintings and assemblage textile works explore various aspects of cultural continuity and the confluence of the historical and contemporary.

As a practicing visual artist, his work has been included in numerous group and solo exhibitions, including:

His work can be found in numerous public and private collections in Canada and abroad, including:

Barry was the recipient of the KM Hunter Visual Artist Award for 2015, an award administered by the Ontario Arts Foundation. He currently resides in Ottawa.