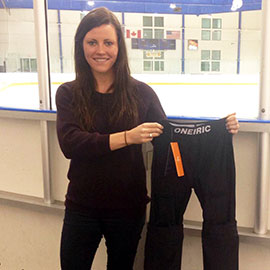 Lazaridis School of Business and Economics alumna Emily Rudow and her co-founder Kayla Nezon were awarded an Ignite Capital Award for their innovative business Oneiric.

Rudow’s strong passion for hockey ignited her dream of building products that would make the game safer and more enjoyable for young players. Oneiric’s flagship product – an all-in-one base layer pant designed to give young hockey players extra protection while making dressing easier – started as a new venture project in one of her classes at the Lazaridis School. It was a hit with her classmates, and after four years of research and testing her final product is now available for purchase.

“My fourth year brought an idea I was passionate about to life,” said Rudow. “The class taught me different areas of starting and running a business that were completely foreign to me, and gave me practical advice from professionals in specialized areas of expertise. I was able to put my ideas into plans and those plans into action after graduation.”

“Winning the Ignite Capital Award was a huge leap forward for our startup,” said Rudow. “The funding, working space, publicity, experience and connections we made with the judges fueled us to bring our business to the next level.”

To add to her success, Rudow has been accepted into the Laurier Launchpad, an incubator for startups. Working closely with her former professor Steve Farlow, Rudow is ready to take on the next steps in her business venture.

"We have some exciting things planned for 2016," said Rudow. "Our hard launch, having product available in some independent retail stores in the Waterloo and Toronto region, working on new pieces of equipment, and moving into adult sizes."

Students hoping to following in Rudow's footsteps can take advantage of Laurier's Entrepreneurship Core option, which enables undergraduate students from all faculties to start commercializing business ideas through courses in their second, third and fourth years. For more information, contact Stephen Preece, academic director of the Schlegel Centre for Entrepreneurship, or visit laurierentrepreneur.ca/academic.