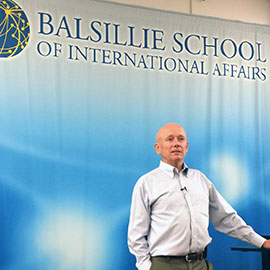 The Lazaridis School of Business & Economics along with the Rimini Centre for Economic Analysis hosted renowned Canadian economist Peter Howitt at the Balsillie School of International Affairs (BSIA) on June 15. His talk, “Innovation and Growth through Creative Destruction,” was based on his joint work with Philippe Aghion—an innovation-based theory of economic growth focusing on incentives for firms to innovate.

Howitt discussed the beginnings of sustained economic growth in England in the late 18th to early 19th century. Over time, discoveries made in England spread, contributing to economic growth in other countries. This increased the size of the market for new products, raising incentives for innovation.

When most inventions had only local effects, the rate of technological progress and innovation was determined by the rate of the population growth, “setting the speed limit for progress,” Howitt added. This is because the larger the population, the more likely someone was going to come up with something great. But when inventions spread around the world, population growth no longer limited technological development. “Technological progress involves a lot of spillovers that aren’t internalized by the companies that create them”, Howitt described. “This paves the way for others to pick up the pieces for their own innovations.”

Because of spillovers, societal benefits of an invention go beyond the direct benefits of the innovator. “You can use tech knowledge over and over again without having to re-invent it,” he explained. Howitt talked about how an innovation continues to benefit society long after it’s created and that people aren’t paid for the knowledge they contribute or for how people build on it in the future. “Knowledge is cumulative…we’re not paying royalties to Newton every time we use a derivative.”

In turn, technological progress determines the rate of economic growth. “We’ve replaced old things with new things that have been invented,” Howitt noted. “Discoveries have been made by people solving practical business problems.” This ongoing cycle of inventions destroys profits of previous incumbents, who then race to come up with “the next big thing.”

Howitt discussed how the effect of competition on the speed of innovation. On the one hand, more competition lowers profits from new inventions, reducing the incentives to innovate. On the other hand, it creates opportunities for growth for those who want to break free from the pack. Overall, he concluded, more competition leads to greater inventive activity and faster economic growth. “When I started off as an economist, economic growth was a very theoretical field,” Howitt said, who credits science for expanding what’s possible, advancing the field to meet society’s needs. “It has led to a lot of controversies that have been settled by the data.”

Howitt’s talk was well attended by faculty members, alumni and members of the community. The next day, Howitt received an honorary Doctorate of Laws from Wilfrid Laurier University at its Spring 2016 Convocation, where he gave an address to graduating students from the Lazaridis School’s Honours Economics program.