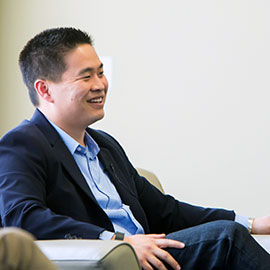 “I never set out to cause this much of a ruckus,” Brad Katsuyama (BBA ’01) admitted to a packed room of students, faculty, alumni and community members on May 5 at Wilfrid Laurier University. Katsuyama is an alumnus from the Lazaridis School of Business and Economics and the CEO, president and co-founder of IEX, a US stock market dedicated to investor protection.

In 2008, Katsuyama, who at the time was working for the Royal Bank of Canada (RBC), noticed that the amount of shares he was bidding for were often only partially filled (50-60%). What was the cause? Katsuyama discovered that when an order couldn’t be filled by one exchange, it would pass along to the ones on the network further away and in that time – approximately two milliseconds – high-frequency traders (HFTs) would purchase it and sell it back at a higher price. This advanced knowledge based on distance, or latency arbitrage, was facilitating a process known as electronic “front-running”.

It finally clicked for Katsuyama why it always seemed that others anticipated his efforts and acted on them – because in fact they actually could. “The only reason others were buying [a particular stock] was because I was interested in it,” he acknowledges.

Together with a team at RBC, Katsuyama created the software THOR to have orders arrive at the four major NYC exchange groups – BATS, Direct Edge, NASDAQ and NYSE – at the same time. By dividing orders into smaller ones and staggering them based on their physical distance to each exchange, they consistently achieved a 100% fill rate.

They had realized something that no one had before. This information would prove powerful, though Katsuyama opted to take an unconventional approach. “Instead of trying to exploit it, we came up with a market-based solution,” he said. In 2012, he quit his job at RBC to start IEX, the Investors Exchange, and hasn’t looked back. IEX uses a “speed bump” - coiled cable that all orders entering or exiting the exchange have to pass through - to ensure that no one can trade with advanced knowledge of quoting and trading activities. As Katsuyama explained: “The most controversial thing we did was slow our market down…by one-one thousandth the speed of blinking your eyes.”

Katsuyama and his team are featured in the 2014 New York Times bestselling book Flash Boys by Michael Lewis, who also wrote the popular books Moneyball and The Blindside. Katsuyama has also appeared on 60 Minutes, the Wall Street Journal and CNBC, amongst others. Behind all this fame is a humble guy who just wants to create a fairer environment for all investors.

“A lot of time, I feel I get way too much credit,” he said. “It was a perfect storm of events. There wasn’t much of a choice.”

After Katsuyama’s talk, the Wilfrid Laurier University Alumni Association honoured Katsuyama with the Alumnus of the Year award at its annual Awards of Excellence. This was Katsuyama’s second award from Laurier – in 2001, he won the Alumni Gold Medal as the top graduating BBA student in the Lazaridis School.

“It was great to see such a large crowd gather together to welcome back one of our favourite Lazaridis School alumni, first at the afternoon talk and then celebrate his achievements at the evening event,” said Micheál Kelly, dean of the Lazaridis School of Business and Economics. “Brad is an extraordinary example of what we want all of our alumni to do – lead lives of leadership and purpose – while also disrupting and contributing innovative solutions to the business world.”