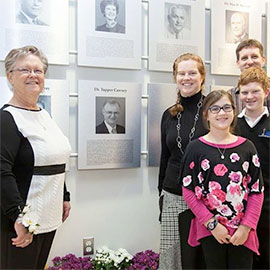 The Lazaridis School of Business and Economics celebrated the unveiling of a new addition to their Builders Wall on Thursday, Oct 22, 2015: the late Tupper Cawsey. Located on the main floor of the Schlegel Centre, the Builders Wall recognizes individuals in the school’s history who have led the school in its development. These builders have been champions that created fundamental change within the faculty.

Recognition as a ‘Builder’ is considered to be a remarkable accomplishment and only the most significant contribution above and beyond normal service is worthy of such recognition. First unveiled in 2008, the wall originally recognized six individuals: Herman Overgaard, Maureen Kuske, Glenn Carroll, Max Stewart, Bob Quinn and Howard Teall. Alex Murray was added in 2012.

"We are honoured to add Tupper Cawsey as our eighth Builder for the Lazaridis School," said Micheál Kelly, dean of the Lazaridis School of Business and Economics. "Laurier has said that our university is here to 'inspire lives of leadership and purpose.' Tupper is one of those people who lived these words.

"Tupper founded a scholarship fund called the Cawsey Leadership Award. I’m pleased to share with you that the endowment now has over $51,000 in it, which speaks to the impact Tupper had on so many people here at the Lazaridis School."

A plaque in Tupper’s honour was unveiled during the ceremony, with the following inscription:

Since joining the university in 1972, Tupper Cawsey’s impact has been significant. He held numerous administrative roles in the Lazaridis School of Business and Economics throughout his career, including associate dean of Business, director of the Laurier Institute, area coordinator of Organizational Behaviour/Human Resource Management, and director of the MBA program. He also served as a member of the university’s Board and executive roles in professional bodies such as the Administrative Sciences Association of Canada and the North American Case Research Association for which he was a fellow and long-serving editor of their journal. Tupper was an exceptionally skilled educator and a consummate advocate for the value that the case teaching method could bring to student development. He had a profound capacity to bring out the best in his students and colleagues. In 2001, he was recognized with the Leaders in Management Education Award as one of Canada’s top five business professors. He was also the 1994 recipient of the David Bradford Educator Award presented by the Organizational Behaviour Teaching Society, and was named Laurier’s Outstanding Teacher in 1990. Both inside and outside of the classroom, he was a passionate and caring advocate for innovation and positive change. He played important roles in building our co-operative education, the live integrated case exercise, the one-year full-time MBA, executive education, and was instrumental in program redesign and development initiatives. Laurier has said that our university is here to inspire lives of leadership and purpose. Tupper is one of those who lived these words and we, at Laurier, are much the better for it.

Photos from the Builders Wall induction ceremony can be found on the Lazaridis School of Business and Economics Facebook page.