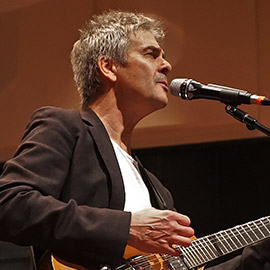 Composition Professor Glenn Buhr’s Symphony No. 4, written for industrial jazz/rock band and orchestra, will premiere on Jan. 27 by the Vancouver Symphony Orchestra (VSO) under the baton of Bramwell Tovey. The work features a prominent role for Buhr's Button Factory Band who will perform the piece with the VSO.

Buhr’s symphony is a protest to the collateral damage and troubled times in our current wars, and he has subtitled the work Guernica 2017 after Picasso’s famous painting Guernica (1937). Picasso’s painting was a response to the aerial bombing of the Basque town of Guernica on April 26, 1937 by fascist German and Italian warplanes.

Symphony No. 4 is “heavily influenced by the protest rock music of my youth, which lives on in new incarnations. I felt that my new work needed to invoke protest rock in some way to make use of that same raw musical energy,” says Glenn Buhr.

Tickets to Glenn Buhr’s Symphony No. 4 premiere with the Vancouver Symphony Orchestra are available online.