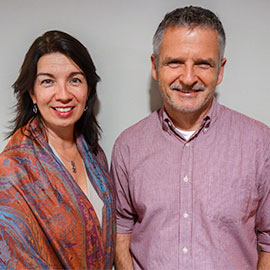 Congratulations to Leslie Fagan and Lorin Shalanko who received a Wilfrid Laurier University Research Support Grant for their recording of Canadian Songbook Volume I.

The Canadian Art Song repertoire that was chosen for this recording resonates with Fagan and Shalanko for its accessibility to young singers. Fagan and Shalanko are hopeful in the future their recordings on Canadian Songbook can be used as a reference tool for teachers and students.

Repertoire on Volume I includes:

Repertoire for Volume II is set to include notable composer Srul Irving Glick for "Seven Tableaux from the Song of Songs," as well as compositions from Lionel Daunais, Michael Coughlin and Anita Noel.

Volume I was recorded in October/December of 2014 and has recently entered the editing process.