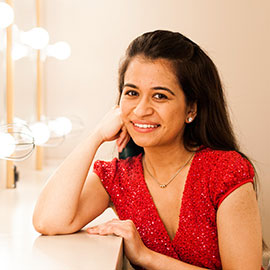 Congratulations to Diana Dumlavwalla (BMus '04), who has been offered a tenure track position in Piano Pedagogy at Florida State University.

"As a graduate of Laurier, I feel grateful and indebted to the faculty giving me such a strong foundation in my undergraduate program," said Dumlavwalla. "I firmly believe that Laurier's training was instrumental in helping me succeed at the graduate level and in turn jump starting my career."

Dumlavwalla has performed in North America, Europe and Australia. Along with violinist, Emma Banfield, she is the pianist of the San Agustin Duo. Her numerous awards include prizes at the Royal College of Music Contemporary Piano Music Competition and the NUMUS Pan-Am Chamber Music Competition. She was nationally recognized when she received the Marusia Yaworska Scholarship and the Elizabeth Massey Award from the Canadian Federation of University Women.

Diana received her Master of Music degree from the Royal College of Music in London, England, a Bachelor of Music in Piano Performance and Voice from Wilfrid Laurier University, and associate diploma from the Royal Conservatory of Music. She has also studied with many fine pedagogues including Agnes Olsheski, Virginia Blaha, Heather Taves, Yonty Solomon and Logan Skelton.