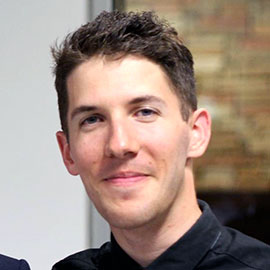 Congratulations to Curtis Wright (BMus ’12), who will receive his Master of Music Theory and Composition in Scoring for Film and Visual Media from New York University (NYU) Steinhardt in Manhattan this spring.

Wright received his Bachelor of Music in Composition/Contemporary Music at Laurier and began his professional composing and arranging career in NUMUS’ 2011-12 Main Series Contemporary Concerti concert with the premier of his first symphonic work, Polaris. Beyond the main series, he also contributed arrangements and orchestrations to NUMUS’ Pop Rock/Avant Series of the last eight Beatle’s albums performed live across four concerts.

Curtis' first film credit as a composer, A Crack, directed by Lilian Mehrel, premiered in the 2014 Brooklyn Film Festival. Currently, he is collaborating with student directors from NYU's Tisch School of the Arts and School of Visual Arts (animations) on several projects.

Curtis has performed an array of band, orchestral, and chamber music literature as a clarinetist; from principle clarinet in Brahms' Symphony No. 1 to wind ensembles and musical theatre (Follies, Grand Hotel). In 2010 he joined the Canadian Armed Forces as a musician to play with the Band of the Ceremonial Guard as a member of the Governor General’s Foot Guards. Officially transferring to the Royal Hamilton Light Infantry (RHLI) after his promotion to corporal in 2011, he participated in five consecutive seasons with the Ceremonial Guard (2010-2014) and performed with the RHLI Band during the rest of the year. His original composition for military band, Immortal Guardians, won the Ceremonial Guard’s first annual March Composition Award presented by Captain Christian Richer in the 2013 season.