The Centre for Public Safety and Well-being (CPSW) has partnered with the Office of Indigenous Initiatives to create the Gladue Principles program. Our team of curriculum developers and advisors have extensive knowledge of historical and contemporary Indigenous issues within the Canadian criminal justice system.

L.M. (Lisa) VanEvery graduated from Wilfrid Laurier University with a Bachelor of Arts degree (Honours) in journalism and criminology. She earned an Ontario College Graduate Certificate in public relations from Mohawk College and a Masters degree in Education from Nipissing University. It is the Indigenous knowledge education that was shared with her over many years by Indigenous Knowledge Keepers that has strengthened her as an Indigenous person and guided her to become an educator.

Lisa is Kanien’kehá:ka (Mohawk) from the wolf clan. She is proud to be from Six Nations of the Grand River Territory.

Lisa works for Aboriginal Legal Services in Toronto. She has written close to two hundred Gladue Reports for courts all over southern Ontario. In 2013, she assisted in helping develop the Indigenous Peoples Court (IPC) that opened at the Brantford Court in January 2014. Over the years, she has developed educational conferences for judicial personnel working in IPC, been a guest speaker at various lectures and developed programming like the Indigenous Knowledge Helpers Program that assists the Indigenous Peoples Court in facilitating sentencing conferences by having Indigenous Knowledge Helpers available to the court. In 2016, she became the coordinator of the Yohá:te ne kahsén:na (Road To Your Name Program), a cultural knowledge program that assists Indigenous people in the justice system who wish to strengthen their cultural connection.

Lisa also a current instructor in the Indigenous Studies program at Laurier.

Lisa is a life-long learner and you can always find her in a language class learning her traditional Kanyen’kéha (Mohawk) language. In her spare time, she reads books and watches documentaries.

Veronica Martisius (she/her) is of mixed European and Mohawk (Wolf Clan) ancestry. She is a member of the Six Nations of the Grand River and was born and raised in Brantford, ON. Veronica currently resides, uninvited, on the unceded homelands of the xʷməθkʷəy̓əm, Skwxwú7mesh and səlil̓wətaʔɬ (aka Vancouver, BC).

Veronica attended law school at the University of Victoria where she was an active member and co-chair of the Indigenous Law Students Association, completed a co-op term with the Indigenous Law Research Unit, and was a student participant in ĆELÁṈENEȽ: A Field Course in the Re-emergence of W̱SÁNEĆ Law. Prior to attending law school, Veronica was a support worker with the Victim Services of Brant and the Ministry of the Attorney General’s Victim/Witness Assistance Program. She also completed her Masters of Arts degree at the University of Guelph where she studied and wrote about the over-incarceration of Indigenous peoples and the establishment of Gladue and Indigenous Persons Courts in territories occupied by the Canadian state.

Veronica was called to the BC Bar in May 2021 and is Staff Counsel (Policy) at the BC Civil Liberties Association. Veronica is passionate about Indigenous rights, human responsibilities and approaching her work with a good mind in accordance with the Great Law of Peace.

Lisa Monchalin is a graduate of Eastern Michigan University where she obtained her Bachelor’s degree in 2004 and her Master’s degree in 2006, both in Criminology. In 2012, she graduated with her Doctorate in Criminology from the University of Ottawa. In 2022, she graduated with her Juris Doctor from the University of British Columbia, Peter A. Allard School of Law. Lisa is a registered citizen of the Métis Nation of Ontario. She was born in St. Catharines, Ontario and grew up in the Niagara Region. She is Métis-Anishinaabe from the historic Métis community of Sault Ste Marie. She also has ancestry that includes Scottish, French, Algonquin and Huron.

Abby Avery is a proud member of Aamjiwnaang First Nations located on the St. Clair River, Sarnia, Ontario.  Abby completed two years of undergraduate studies in sociology at the University of Western Ontario and then graduated from the University of Western Ontario Faculty of Law in 1995 with an LL.B. She commenced her legal career originally working for a Native Friendship Center prior to opening a private law practice.  She practiced in the areas of family and criminal law, and was a representative for children through the Office of the Children’s Lawyer.

In 2004, she left private practice to work for the Ministry of the Attorney General as an Assistant Crown Attorney in both the Hamilton and Brantford offices, moving exclusively to the Brantford office in 2008.   As an Assistant Crown Attorney Abby was actively involved in the Indigenous People’s Court, participating in sentencing circles and working with judges, defence and accused, along with their families.

In 2019 Abby took a leave to join the Indigenous Victim Services at the Six Nations Department of Justice as their manager and lawyer. Abby has a commitment to justice and being a voice for the disadvantaged.

Abby’s mother was a survivor of the residential school in Brantford known as the “Mush Hole”.

During her leisure time she enjoys hiking and travelling with her husband. 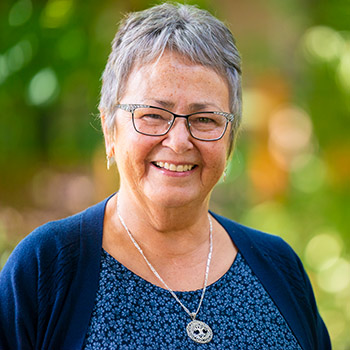 Jean Becker is Inuk and a member of the Nunatsiavut Territory of Labrador. A grandmother, Jean has lived in Ontario for forty years and has been involved in grassroots urban Indigenous community building throughout that time in Wellington and Waterloo regions. Jean is currently a member of the Mayor’s Diversity, Equity and Inclusion Taskforce in Kitchener and a member of the Wellbeing Waterloo Region First Nations, Metis and Inuit Advisory and Advocacy Circle. She is the Senior Director Indigenous Initiatives at the University of Waterloo. Actively involved in Indigenous ceremonies and advocacy work for Indigenous people locally and nationally, Jean is passionate about her work to implement decolonization.