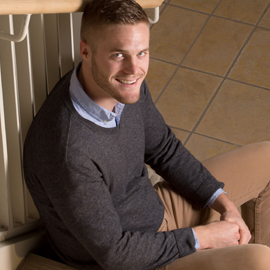 Temptation comes in many forms.

For Will Webb, a fourth-year Communication Studies student, it was a shot at a job in the advertising industry.

Well, it wasn’t exactly a job. It was an internship that paid a measly stipend.

“I was so torn,” Webb said recently while recalling the incident.

He weighed the possibility that the internship might lead to a real job somewhere, someday.

So after some head-scratching and hand-wringing, Webb turned down a chance to get a toehold in a glamourous business.

On the other hand, by resisting temptation he may have kick-started a career that’s closer to his heart.

“Ideally, I’d love to be a professor.”

In one of his courses, Webb studied the hot-button issue of unpaid internships.

Are they great opportunities for young people in a tough economy? Or are they nothing more than exploitation?

Webb, who’s also majoring in philosophy, resolved that for the most part they’re unfair.

Encouraged by one of his professors, Webb wrote a research paper on strategies that activists are using to oppose unpaid internships in Ontario.

Webb did such a solid job that his paper has been accepted for publication in an academic journal (Greig de Peuter, a professor who encouraged Webb to submit his paper, is co-editing the special edition where Webb’s paper will appear).

And for aspiring scholars, being published in academic journals carries real weight.

It wasn’t the only time he got valuable mentoring from teachers at Laurier.

“I’ve had that with a couple of other professors,” said Webb, who has 3 papers in different stages of being published. “Unbelievable coaching and guidance — it’s fantastic.”

Faculty Have Breadth of Expertise

With more than 1,100 students, it’s by far the largest department in Laurier’s Faculty of Arts.

Another strength, Finn added, is the breadth of scholarship throughout the programs.

The department’s professors have expertise in a wide range of disciplines including political science, sociology, cultural studies, anthropology, visual culture, and social and political thought.

For example, one of the professors (Penelope Ironstone) studies how popular culture and the mainstream news media can help spread fear and anxiety about an outbreak of a potentially deadly virus, such as Ebola or influenza, and what can be done to prevent it.

And while Webb has found success communicating his scholarly work through a traditional medium — the academic research paper — Communication Studies faculty often allow students to demonstrate what they’ve learned through different types of projects: blogging; devising social media strategies; and writing articles in the style of news stories.

Two students recently submitted a project where they made a video about graffiti, explaining how it relates to aspects of a scholarly communication theory.

“It’s more labour intensive,” Finn said. “But those are the assignments students tend to remember.”