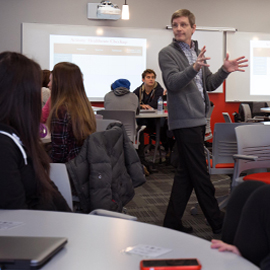 The grinding guitar sound driving out of the classroom and through Laurier’s hallowed halls is a big clue that an old-fashioned lecture is definitely not on today’s playlist.

Poking your head inside the class you’re surrounded by video screens and Robert Palmer belting out “I’ve got a bad case of luvin’ yoooooo.”

Well, folks … say goodbye to “Introduction to North American Studies” (what this course used to be called).

It’s still an introduction to politics, culture and society and the ties between Canada, the United States and Mexico, says Spooner, who co-teaches the course with instructor Bina Mehta as part of the North American Studies program.

But the course has been completely overhauled.

Not just the content — which has been updated — but also the way it’s packaged, presented and even the way students are graded has been reformed with an eye to draw students in and keep them along for the ride for the entire term.

Spooner says Billionaires, Beavers and Banditos is designed to explore similarities and differences between Canada, the United States and Mexico, and to study how our national identities have been constructed.

The course title, in addition to being kinda catchy, plays into longstanding stereotypes we often have of ourselves and each other.

But who are the billionaires? Are they only Americans? What about Canadians and Mexicans?

While students read about J.D. Rockefeller, the uber-wealthy American oil tycoon of the 19th and 20th centuries, they also learn about Carlos Slim who is one of the richest people in the world today — and he happens to be Mexican.

A key theme, Spooner says, is our perceptions and misperceptions of each other.

In addition to the video screens and white boards lining the classroom — a new Faculty of Arts creation called the Active Learning Classroom — the space is furnished with round tables where students can easily plug in their laptops.

About half of the coursework is done online.

In the lead-up to each class, students are assigned to watch 4 short lectures that Spooner and Mehta recorded specifically for the class; to read academic articles; to submit a written response; and to complete a quiz.

Inside the classroom, Spooner and Mehta work as a tag team: delivering the lesson in short chunks before assigning groups to explore the topic of the day. Spooner and Mehta circulate from table to table and facilitate the discussions.

Marks are meted out every little step of the way in an attempt to encourage first-year students to develop good work habits and to prevent them from getting overwhelmed with huge assignments.

“My gut sense is they’re keeping up with the work,” Spooner said. “Which may not have been the case the way we taught in the past.”