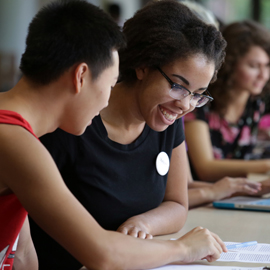 Something to think about: Campus tour kick-starts student’s brain

Something to think about: Campus tour kick-starts student’s brain

You might think that Christina Shirley resents Laurier for ruining her chances of ever relaxing at the movies again.

After all, instead of parking her brain while watching the latest Hollywood blockbuster, films now set her mind in gear.

“I still enjoy movies,” the third-year English and Film Studies student said during a recent chat at the Waterloo campus. “I like being analytical — I like to think about things.”

Shirley credits her broad range of first-year courses — English, Film, Gender, and Medieval Studies — with helping her decide on a double major.

“They gave me the tools to think about things.”

A longtime fan of movie musicals, Shirley recalls watching the old classic Singin’ in the Rain many years before coming to Laurier.

Back then, Shirley would have told you that she liked the old black-and-white film because of its songs, the music, and the “great” storyline. Now she also appreciates its cinematic style, and its place in Hollywood film history.

“I think about why I like it, or how the filmmakers have manipulated me to like it,” she said, laughing.

And she uses her new-and-improved critical thinking skills whenever she reads text — including fantasies like The Hobbit — conveyed through any medium.

Shirley got interested in Laurier while doing a victory lap at high school. Her best friend was going to Laurier at the time, so Shirley put the Waterloo campus on her list of 10 universities to tour.

It was while touring one of the residences that everything fell into place: one of the guides was an English student.

“At that point, it just clicked,” Shirley said. “It made my decision [to come to Laurier] pretty easy.”

Shirley is optimistic about her future — she doesn’t buy the argument that Arts grads don’t get jobs.

“I do not believe that at all,” said Shirley, who works part time at the campus Writing Centre, has founded a creative writing club, and has already shot and edited videos for a local not-for-profit agency while doing a co-op placement.

“I think you get out of your degree what you put into it,” she added. “I have a lot of career choices.”

Reasons to Study English and Film

She said that Arts students gain the skills to think critically and write well, and also get many opportunities to hone presentation skills that are valuable in any line of work.

Very few, if any, recent graduates walk straight into jobs with great pay and grand titles, Lischke noted. But in the course of their careers, she said, Arts graduates often work quickly through the ranks to higher-level positions. Many business leaders want new employees to think critically and communicate effectively, Lischke said.

“The rest is training.”