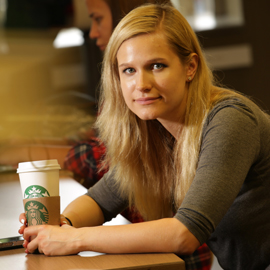 Sacred spaces in commercial places: Religion and Culture student finds spirituality in places you might not expect

Sacred spaces in commercial places: Religion and Culture student finds spirituality in places you might not expect

Giant cups of steaming coffee draw hordes of devotees to Starbucks every day.

According to Keelin Pringnitz, some of them pour through the doors for a taste of spirituality.

In a recent paper Pringnitz, who is studying toward an MA in Religion and Culture at Laurier, explored the notion of people making sacred spaces in commercial places — coffee shops, shopping malls and yoga studios.

No doubt, congregations in many western countries are dwindling. But Pringnitz notes that religion is still a large part of Canadian society.

“Religion is not dying — it’s changing,” she says.

A Key to Understanding

In her paper, written as part of her major undergrad project, Pringnitz surveyed roughly 50 people about their spiritual experiences at different semi-public places, including two Starbucks outlets near Laurier’s Waterloo campus.

Even when respondents noted that they belonged to a particular religious tradition, many counted themselves among the growing flock that religion scholars call “spiritual but non-religious.”

So they’re gathering in spaces that haven’t traditionally been considered sacred. And they’re performing rituals, albeit not the traditional kind.

Pringnitz considers many of the devotees’ coffee-shop activities — chatting with a familiar barista instead of a pastor, and poring over a text while steeling away from the hubbub of the modern world —  to be modern rituals performed on the road to moments of transcendence.

Of course, Pringnitz notes, not everyone would say their local coffee shop is a sacred space.

But when she’s having a bad day, she said, her ‘time out’ at a coffee shop can conjure a feeling of inner peace.

Despite the shift away from traditional religion for many people Pringnitz, who was raised as an atheist and isn’t a member of any religious tradition, said that understanding religion is an important part of living in a multicultural society.

“Religion is like politics,” she said. “It’s a fundamental part of human nature.”

“The history of religion is important,” Duncan says. “But we’re interested in changes, challenges, conflicts and how people find new meaning.”

About 50 students are enrolled full-time in religious studies programs at the bachelor’s, master’s and PhD levels. But each year the department’s instructors and 9 full-time faculty teach more than 3,800 students, many of them taking electives as part of other Faculty of Arts programs.