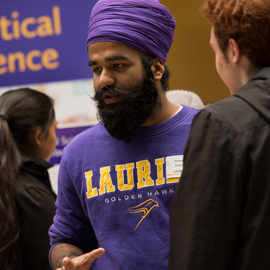 Lesson during lecture comes in handy on the street

Lesson during lecture comes in handy on the street

When Kanwar Brar knocked on the door at a local apartment during the provincial election campaign last spring, the man on the other side wasn’t happy — not happy at all.

“He was very loud and was yelling at us,” Brar recalled recently.

Angry Man’s words can’t be printed here. Let’s just say he spewed the F-word a few times and compared the Liberals, the party Brar was canvassing for, to genitalia.

But Brar, a second-year political science student at Laurier, didn’t take it personally.

He remembered one of his first-year lectures where the professor said a segment of voters are true diehards — they’ll never switch sides. So, as the old saying goes, keep calm and carry on.

Brar found that even while sitting safely in a classroom the atmosphere can get a little rocky.

During a first-year tutorial the teaching assistant split Brar’s class into two groups and assigned them to debate for, or against, abolishing Canada’s Senate which was embroiled in scandals over senators’ expenses.

Personally, Brar opposed trashing the Senate, arguing that it’s an integral part of our lawmaking system so we shouldn’t react to headlines by making knee-jerk decisions.

But in class, he was assigned to argue for abolishing the Senate.

“I had to rip my own opinion apart,” he said.

Brar said he still opposes abolishing the Senate but adds that it should be reformed, in some way, to reduce scandals.

“I modified my opinion,” he said. “The assignment helped me find middle ground.”

The exercise forced him to research the facts and consider different sides of the argument.

“It helped me develop my critical thinking skills and analytical skills,” he said. “It does make me think two steps ahead — be more analytical about things.”

“We’re trying to give students a basket of skills that they can apply to do a variety of jobs,” said Debora Van Nijnatten, associate professor and chair of Laurier’s Department of Political Science.

In Brar’s case, career goals include working on election campaigns, developing policies for political parties and governments and, hopefully someday, getting elected to public office.

But studying political science isn’t just for people who want to become politicians.

While Laurier’s programs give students solid grounding in political institutions and governance processes, the thrust of the course content is evolving.

“We’re moving into an era where courses are more focused on the kind of policy work you might do with an advocacy or interest group, or the private sector,” Van Nijnatten said.

For example, one of the department’s 20 full-time professors is working to prevent food shortages in cities in Africa. Another professor studies redevelopment issues in Haiti. And Van Nijnatten researches and writes policy recommendations to help govern the world’s largest supply of fresh water — the Great Lakes — which straddles international, provincial, state and municipal boundaries.

But traditional political science studies aren’t ignored: one professor is helping draft a new constitution for Yemen, and the Laurier Institute for the Study of Public Opinion and Policy — which involves several faculty from the department — investigates the effects of public opinion on policy-making.

And with social media playing such a huge role in politics (think Arab Spring) the implications of instant digital communication are being discussed in more classes and embedded in more courses, Van Nijnatten said.

“It’s going to keep moving,” she said. “People are very excited about the change.”