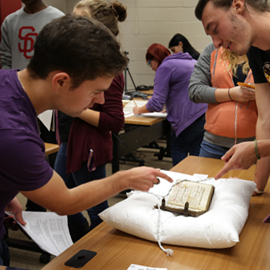 The funny thing about the class Jacob Roznicki led for a Harry Potter course recently is that there was nary a word about the famous fictional magician.

No lessons about spells or lectures on Hogwarts were delivered during this particular foray in Laurier’s new first-year class in Medieval Studies.

Instead, the dozen students were enchanted by the real-life medieval manuscripts splayed at their fingertips:

“They didn’t shave it closely,” explained Roznicki, pointing to the black speckles on some of the hymnal’s calfskin pages.

It was hard for Roznicki, a fourth-year Medieval Studies student, to contain his excitement.

He buzzed from table to table and dropped juicy factoids as he flipped through manuscript pages and copies of beautifully illuminated books.

The enthusiasm of the young man, captivated by the days when Europe was ravaged by bubonic plague, was positively infectious.

After he graduates with a BA in History and Medieval Studies, Roznicki plans to go to teachers college and hopes to take his passion for history into high school.

“I want to get people really inspired to go to university,” he said.

When Roznicki told his friends about taking The Medieval World of Harry Potter course in third year (unfortunately, it was a one-off course that probably won’t be held again), many of them wanted to know where to sign up. And his Mom, knowing her boy’s longtime fascination with knights and fire-breathing dragons, was sure he would enjoy it.

Potter is One Path to Self-discovery, Critical Thinking

When students peer through Potter’s spectacles at old manuscripts, they also get lessons on the state of education in the Middle Ages and the birth of universities. They learn about monasteries and monks and how information was copied by hand and spread throughout Europe long before the Internet was invented.

The courses also fit the program’s tilt toward Medievalism (the study of how medieval history is portrayed in pop culture). So as students learn about the real medieval world, they also discover how authors tweak historical fact into modern-day fiction.

All in all, Laurier’s Harry Potter courses mesh with the idea that a liberal arts education trains students to think critically, write well and to be able to speak persuasively.

And if you give students a subject that captures their imaginations — like Harry Potter — they’re more likely to learn those skills, Nighman argues.

A liberal arts education is also a voyage of self-discovery, he adds.

“And the better you understand yourself, the better equipped you are to take control of your own destiny.”