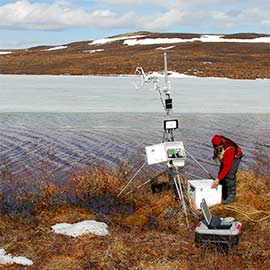 Whenever Professor Philip Marsh heads to the Arctic to research the effects of climate change on precious ecosystems, he takes along some travel essentials — Laurier students.

Marsh, a professor in Laurier’s Department of Geography and Environmental Studies, recently took two students on a two-week research trip to the Northwest Territories.

Spending nights in Inuvik, each morning they hopped on a helicopter and sped over the vast landscape strewn with streams and lakes. Twenty minutes later they would touch down in the middle of somewhere, surrounded by tundra as far as their eyes could see.

“Anybody who goes out there says ‘Wow, this is fantastic,’” Marsh testifies.

Marsh says his passion for Canada’s vast network of streams and lakes led him to research water systems in the Arctic.

While the concept of climate change may sound simple — the world is slowly getting warmer — predicting its effects is complicated, Marsh says.

Researchers can’t get an accurate picture of how the levels of rivers and lakes in Canada’s Far North will change simply by measuring rainfall and snowmelt.

But it’s essential to collect enough environmental data and to design computer models to predict the effects of climate change.

Without accurate data, for example, governments that regulate the construction of roads and mines wouldn’t have enough information to approve bridges over rivers whose flooding patterns are likely to change during the next 50 years.

And many parts of the ecosystem are interconnected, Marsh notes, so it’s also vital to get an accurate prediction of how climate change will spur the growth of shrubs and melt permafrost, affect caribou and reindeer habitats, and alter supplies of drinking water for communities.

A Varied Bunch, Under One Roof

The students working with Marsh above the Arctic Circle are among roughly 20 Laurier students doing research in the Far North, said Michael English, chair of the Department of Geography and Environmental Studies, one of 11 departments in the school’s Faculty of Arts.

Laurier has forged a unique relationship with the government of the Northwest Territories to conduct environmental research throughout the region. The 10-year agreement gives upper-year undergrad, master’s and PhD students — students in geography, environmental studies, biology and chemistry programs — lots of opportunities to conduct their own projects and influence government policy in the Arctic.

The department has made hydrology (water studies) in the Far North one of its strengths, English said.

But the department’s instructors and 22 full-time faculty members also conduct research in human migration; mapping and computer modelling that has tracked the spread of diseases transmitted from animals to humans; as well as other disciplines.

“To solve problems in a real sense, we have to have a variety of expertise focusing on the problem,” English said.

“The faculty are a varied bunch under one roof,” he added. “So the students benefit.”