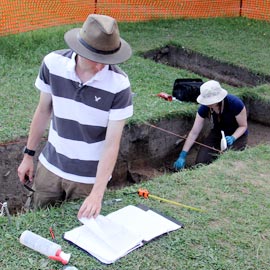 A touch of the past: Archaeology students get their hands dirty before getting degrees

A touch of the past: Archaeology students get their hands dirty before getting degrees

It was dusty, dirty, sweaty work under a scorching Mediterranean sun but Scott Gallimore says the Laurier archaeology student standing in front of him was beaming.

“He had a smile plastered on his face.”

Gallimore, assistant professor in Laurier’s Department of Archaeology and Classical Studies, recalls the day one of his students made a rare find.

It was the fourth week into a 6-week excavation on the Greek island of Crete.

Twenty-three students accompanied Gallimore on that field project in 2013. Their mission was to sift through the remains of a 4,000-year-old city. In the years of digging up to that point, nobody had found an artifact so rare.

The student unearthed a ceramic mould, about the size of a large flat brick, that people from a distant time used to forge bronze chisels.

“This is the type of artifact you would see in a museum,” Gallimore said.

Not only was it unique — it was intact.

While the student’s find was rare, his time spent on an active archaeological project is common.

In fact, field placements are mandatory for Laurier archeology students — before they’re allowed to graduate, students have to take a 6-week field school somewhere in North America or overseas.

Students have recently participated in digs in Greece, Egypt, Bermuda and, closer to home, Midland, Ontario. In 2015, some students will be working on an excavation at the Old Fort Erie, Ontario, War of 1812 site.

It’s one of the features of Laurier’s archaeology program that gives students an advantage when they look for summer jobs between study terms and for career jobs after they graduate, says Associate Professor John Triggs, chair of the Department of Archaeology and Classical Studies.

Faculty members encourage students to take on a field placement early, after their first year of studies if possible, so they’re employable for summer jobs.

“Once a student has done a field school, they get hired,” Triggs says.

There has been a huge interest in heritage preservation, also known as “cultural resource management,” around the world during the past few decades.

And in Ontario, he notes, builders are legally obligated to produce archaeological assessments before highways, windmill farms and other major developments can go ahead. So heritage preservation is a theme running through all of the courses taught by the department’s 5 full-time faculty members, Triggs said.

But not all archeology work is done under a scorching sun.

Laurier’s Department of Archaeology and Classical Studies houses thousands of artifacts from different digs. As part of their studies, students help catalogue and maintain historical treasures unearthed during various excavations.

So, what happened to the rare artifact Gallimore’s student found in Greece?

It’s being preserved in a facility on Crete and will hopefully be displayed in a museum someday.

And what about the student who found it?

“He’s working as an archaeologist in British Columbia,” Gallimore said.