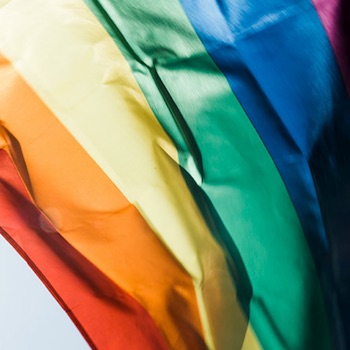 Wilfrid Laurier University will fly the rainbow flag beginning June 1 and throughout the month of June in support of Pride Month.

Flying the rainbow flag symbolizes Laurier’s commitment to honouring the identities, experiences, and contributions of the 2SLGBTQ+ community and their continuing struggle for social, political, and economic equality.

The rainbow flag will join Laurier’s other flags at half mast until June 8 to honour the memories of the 215 Indigenous children whose remains were discovered at the Kamloops Indian Residential School.

The university recognizes that addressing transphobia, homophobia, and biphobia includes a commitment to seeking equity for marginalized 2SLGBTQ+ community members and that their individual experiences are unique based on intersectional identities such as gender, sexuality, Indigeneity, race, class, ability, age, religion and citizenship.

Promoting diversity and a culture of inclusivity is a Laurier hallmark. It is embedded in the university’s official statement of Values, Vision, Mission and Guiding Principles and encouraged across the university. Flying the rainbow flag is one way of reminding the university community that intentional and necessary measures are needed to create an environment where everyone can live authentically.

There are many different pride flags, each representing a diversity of sexualities and gender identities. Laurier’s locations in Waterloo, Brantford and Kitchener will fly the first rainbow pride flag created by Gilbert Baker in the late 1970s which represents liberation and hope.