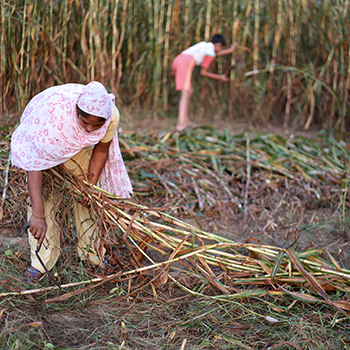 The Department of Political Science at Wilfrid Laurier University will host a panel discussion about the farmers’ protest ongoing in India since September 2020. The farmers’ protest, or Kisan Andolan, has affected the lives of more than 260 million people.

The Protest Affecting Your Pantry: A panel discussion about the ongoing farmers’ protest in India will be held on April 9 at 11 a.m. The event is free and open to the public, but registration is required.

Jaskaran Singh Sandhu, a senior consultant with Crestview Strategy in Toronto and the former executive director of the World Sikh Organization of Canada, and Harbaljit Singh Kahlon, a management consultant in the financial services industry, board member of Seva Foodbank and a grassroots organizer in the Sikh community, will speak as part of the panel, which will be moderated by Anmol Rana, a student in Laurier’s Master of Applied Politics program.

Farmers have been protesting three farm laws passed last September by the Indian government that they believe will destroy the livelihoods of more than half of India’s 1.39 billion residents who rely on agriculture as their primary source of income. Before the new laws were enacted, the government legislated a minimum support price for certain goods and placed restrictions on who could purchase those goods at state-run auctions. Prices were also capped for essential goods. Under the new laws, the Indian government says that farmers can sell their goods to anyone at any price. However, farmers argue this will allow large corporations to drive down prices to unsustainable levels.

Sandhu and Khalon will discuss the efficacy of the ongoing farmers’ protests and the Indian government’s response, the role of the media in the protest, and national and global repercussions. The event will also include an opportunity for audience members to ask questions.