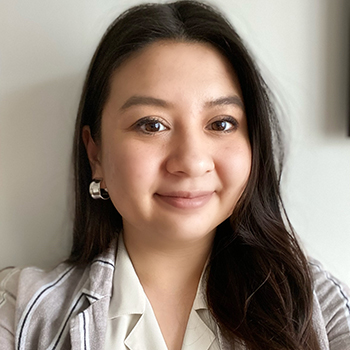 Jazzmine Gabert, a fourth-year Wilfrid Laurier University political science student specializing in legal studies and research, has been chosen as one of 57 Canadian students to receive a $10,000 Ontario Remembrance Scholarship.

Gabert will graduate this spring and plans to study toward her master’s in international development and globalization at the University of Ottawa in the near future with the goal of one day working in international humanitarian law.

“As a society, we need to do more to amplify the voices of those silenced by crimes against humanity and authoritarian regimes,” says Gabert. “We’re so fortunate to be in a society where we’re able to advocate for our rights, but not everyone has that opportunity.

“The people who lost their lives in the crash will never be forgotten.”

Wilfrid Laurier University was chosen to award a one-time $10,000 scholarship this academic year to a student who devotes a significant portion of their extracurricular time to promoting social connections, breaking down barriers and supporting vulnerable or marginalized peoples. More than 300 Laurier students applied for the award.

Outside of her studies, Gabert dedicates her time to Laurier’s Pre-Law Society, where she serves as president, and Laurier Students’ Public Interest Research Group, where she sits on the board of directors and advocates for the rights and safety of women and Black, Indigenous and people of colour on campus by reviewing and challenging policies and initiatives. She has also been involved in Laurier’s Moot Court, which sees students compete to best represent appellants and respondents in a mock court of appeals. Gabert was recently recognized for her public speaking skills during a Moot Court competition at the York University’s Osgoode Cup, where she placed as one of the top three advocates overall.

In her role with Laurier’s Pre-Law Society, Gabert invited women of colour in the law profession to speak to students as part of a panel discussion to encourage marginalized students interested in the profession, demonstrate the importance of their lived experiences and combat imposter syndrome. She also helped coordinate internships for students with a criminal defense lawyer.

Through her internship at the Raoul Wallenberg Centre for Human Rights, a Montreal-based non-governmental organization dedicated to pursuing justice through the protection and promotion of human rights, Gabert has learned more about human rights abuses globally, including against political prisoners and human rights defenders.

“The opportunity has opened my eyes,” says Gabert. “Political prisoners’ stories, and their contributions to humanity, are so incredible. Authoritarian regimes around the world are trying to diminish their voices and we must do everything we can to denounce this. In the future, I want to play an increasingly active role in fighting for the pursuit of justice and ensuring their compassion and change are not diminished. This experience and the phenomenal leadership team at the centre has inspired me to pursue this as a career.”

Gabert is also working as a research assistant this semester, assisting Associate Professor Jörg Broschek with research related to the pandemic, foreign relations and international trade.