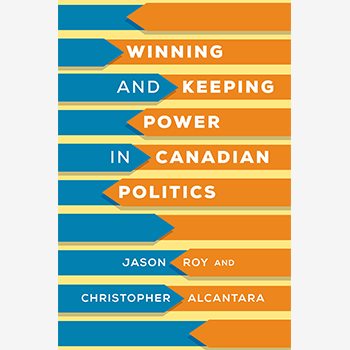 Winning and keeping power in Canadian politics: A Q and A with Jason Roy

Winning and keeping power in Canadian politics: A Q and A with Jason Roy

Do negative campaigns win elections? Do voters abandon candidates accused of scandalous behaviour? Do government apologies affect prospects for re-election? These are just some of the questions Jason Roy and his co-author Christopher Alcantara consider in their new book, Winning and Keeping Power in Canadian Politics.

The collaboration between the two former colleagues – Roy, an associate professor of political science at Wilfrid Laurier University, and Alcantara, a professor of political science at Western University – began in 2012 when Alcantara walked into Roy’s office and started a good-natured debate about the merits of fixed election dates. They built an online experiment to test if their views held up to empirical scrutiny and enjoyed it so much that they have been conducting similar studies ever since.

Eight years later, they’ve conducted enough political behaviour experiments to fill a book. With chapters on topics ranging from candidate endorsements to framing political scandals, the co-authors have written what they call “an empirically informed handbook primarily for academics, but also for course instructors and students in the classroom, politicians in the corridors of Parliament Hill, and political strategists on the ground in election campaigns.”

In a recent interview, Roy answered questions about the book’s findings and how they can be applied to Canadian politics.

Q: In the preface to the book, you write that this “is not your typical scholarly monograph.” What inspired you to use a handbook format with chapters on individual topics rather than one consistent thesis?

Roy: Our goal was to try to make this book accessible to as many people as possible. The type of work that we did asked a number of smaller questions that fit under two general themes about winning and keeping power, but they were essentially standalone studies. So we wrote the book so that each of the chapters could be read as standalone chapters.

Q: How does this format lend itself to teaching students?

Roy: The book should serve a couple of purposes from an education perspective. One is that it provides a variety of examples of how we can use experimentation in political science to test some of the assumptions that we have or to observe behaviours that we may not otherwise be able to capture. Hopefully it’s going to spark some interest for students.

Secondly, each one of these chapters focuses on a debate or a common assumption that we hold about Canadian politics and how elections are run and won. Chapters could be assigned to frame a discussion about whether or not it holds, and how it might apply in the real world.

Q: Voter behaviour is notoriously hard to predict. How effective are experimental methods at discovering patterns in public opinion?

Roy: The advantage of using the experimental method for this type of research is that we have complete control over the environment, allowing us to introduce one new factor at a time and observe its impact compared to what we observed without the stimulus. If we see a difference in behaviour, then we have greater confidence that it was that one specific thing that “caused” that change. It’s a trade-off: we can do a lot of things in a lab environment where we have complete control and can make fairly conclusive causal inferences, but the question is how well they hold up in the real world where there may be a number of other factors influencing behaviour.

Q: Canada has a minority government and opposition parties regularly dangle the threat of an election. How could your findings regarding election timing influence strategy for parties in the current moment?

Roy: There are two chapters that could apply to this. One is about election timing and one is a chapter about government configuration. In the government configuration chapter, what we found is that when a minority party triggers an election by voting against the government, it doesn’t seem to have much of an impact on either party’s vote share. It’s about a two-percentage-point drop in the vote share for that minority party versus what they would have if they supported the government and waited for the election at the regular time. In that sense, it may not matter so much.

What does seem to matter is the timing of the election from the governing perspective. Our results clearly show that when the incumbent government calls an election when public opinion is most favourable to them, that’s when they do best, which fits with conventional wisdom. Fixed election dates in Canada were supposed to help us try to limit the use of this power. But as we’ve seen in the recent example of New Brunswick, which is currently involved in an election campaign following a call from the governing party, there are ways in which parties can get around it.

Q: Do you think it’s advantageous for any of the federal parties to force an election right now?

Roy: At this point, probably not. From the Conservative perspective, coming back in with a new leader, I suppose if they can force an election at a point when the government is not viewed favourably by the public, perhaps. But it may be a complicated process, particularly given world events and the current situation with COVID-19. I think the public is pretty focused on other things. But that can change rapidly and it certainly can change if additional controversies come forward.

Q: What can candidates learn from your chapter on negative campaigning?

Roy: We have shown that going negative does increase the attention that people pay to the candidate that’s attacking. However, it backfires when it comes to the vote. A candidate is less likely to receive as much support when they attack their opponents as opposed to when they don’t.

The complication in the Canadian context, or any other multi-party context, is that voters are less likely to vote for candidates who are campaigning negatively unless all of the other parties go negative as well. Then all bets are off. The bottom line is that if you are going to go on the attack, you want to drag your opponents into it as well. Otherwise you run the risk of being the only one and our results clearly show that in a multi-party competition, this has a strong negative impact on your vote share.

Q: Another thing that typically seems to have a negative impact on vote share is introducing new taxes. What can politicians learn from your chapter called ‘Framing Public Budgeting?’

Roy: We found that when we actually included the value of a new spending measure, there’s much more support relative to when we don’t include a cost. So our takeaway for governing parties is that if you’re going to introduce any new budgeting mechanisms, it’s better to attach the numbers to it. How much is it going to be for the average person? Because otherwise people tend to overestimate how much it’s going to cost them and that has implications for public support.

Q: In each chapter, you have included follow-up questions for future study. Will you and Professor Alcantara continue your collaboration?

Roy: Yes, we are already planning the next volume that will build on some of our findings to try to tease out more of these results. We had a lot of fun with this. We have very different perspectives. My background is quantitative, with a focus on research design and experimentation, while his background is much more qualitative, with expertise on inter-government relationships and federalism. The combined approach, I think, led to a higher-quality piece of work because he had to convince me as much as I had to convince him, and then from that we produced this book.