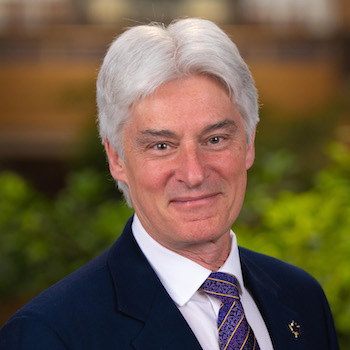 Over 700,000 people die each year due to drug-resistant diseases and this figure could increase to 10 million per year by 2050, according to a 2019 report to the United Nations.

As the search continues for new antibiotics to treat drug-resistant infections, a team of researchers led by Anthony Clarke, professor and dean of Science at Wilfrid Laurier University, is addressing the problem from a different direction, by trying to weaken the ability of bacteria to develop resistance in the first place.

“The goal is to knock the bacterial cells down in terms of their resistance,” said Clarke. “We haven’t been successful over the last 30 years in finding new classes of antibiotics so, in the short term, we’re trying to weaken the cells so our own immune system can take over to fight infection.”

The target for his team’s work is peptidoglycan, which gives bacterial cell walls their rigidity.

“Think of it as building a brick wall around the bacteria’s cells,” said Clarke.

Since peptidoglycan can be broken down by lysozyme, an enzyme that exists in human immune systems, bacteria have developed strategies that block these enzymes by modifying their peptidoglycan, thereby “cementing the bricks in place,” and resisting our defences.

In the search for compounds that will stop the enzyme from modifying peptidoglycan (and helping pathogenic bacteria survive), Clarke and his colleagues used the CMCF beamline at the at the University of Saskatchewan to study one particular enzyme of Staphylococcus aureus, a bacterium that causes a wide variety of diseases in humans and animals. The CMCF beamline is part of the Canadian Light Source machine, which is referred to as “the brightest light in Canada” and allows researchers to observe tiny details that otherwise cannot be seen.

“To try to develop compounds that inhibit the enzyme, you need to know what that structure looks like at an atomic level,” said Clarke, who has been studying enzyme systems for more than three decades. “You need to see the compound inside the structure, where it binds. Then you can use chemistry to modify the compound to make it bind tighter and enhance its overall effect.”

The objective is not necessarily to kill the cell, but rather to find inhibitors that make the cell more susceptible to our immune defenses. The research, recently published in The Journal of Biological Chemistry, is foundational science that could guide the development of new antibacterial drugs.

“It’s a lot of hard work and very few eureka moments, and it’s always a challenge to stay ahead of bacteria, but I’m optimistic,” he said. “With the knowledge we’ve been gaining, the technologies available to us and the talent of young scientists who understand the importance of basic research, I know we’ll carry on the fight.”