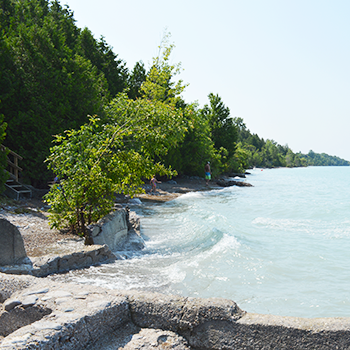 Where did the beaches go? A Q and A with a Laurier Great Lakes expert

Where did the beaches go? A Q and A with a Laurier Great Lakes expert

The Great Lakes have been hitting record-high water levels during recent years, causing widespread erosion and threatening the stability of shoreline properties. Across southwestern Ontario, Lake Huron beachgoers are greeted by diminishing stretches of sand, while sections of the North Shore Trail between Port Eglin and Southampton have been washed out.

To understand the dramatic increases in lake levels, we asked expert Mary-Louise Byrne, a professor in Wilfrid Laurier University’s Department of Geography and Environmental Studies. Byrne’s research focuses on the sustainable management of Great Lakes beaches and dunes, especially in protected areas.

Q: Dr. Byrne, for several years we have been hearing about shrinking beaches and shoreline cottages being threatened by eroding bluffs. Why is this happening?

Byrne: There is a natural variation in the water levels of the Great Lakes. Sometimes the change from high to low happens in as little as five years. Sometimes it’s as long as 15 years. Many people picture the Great Lakes at low levels because we recently had about a 15-year period of low levels.

During that time, some shoreline property owners became a bit complacent. They thought, “The water levels are low. There are all these regulations about only being able to build up here at the high part of the beach, but I want to have a boathouse and a dock, and yet I still want to have my nice wide beach.” They built out toward the waterline in spite of regulations that prohibit this. The term for this is encroachment: they encroached onto the beach thinking it was perfectly fine because year after year there were low levels.

I felt like I was Chicken Little saying, “The levels are going to come back up!” And people would look at me like I was crazy. And now we’re back to the high levels. Unfortunately, we’re back to record-high levels. So we’re still within the natural variation that occurs on the Great Lakes – we haven’t gone beyond it. We’re just at the high-level extreme.

Q: Why are the Great Lakes ‘at the extreme’ when it comes to water levels?

Q: Climate change aside, what are some of the natural factors that affect lake levels?

Byrne: Storm patterns are a significant factor. If storms originate in the Gulf of Mexico, they bring lots of moisture and increase the water levels. If we have winds that develop from storms over the Great Plains, those winds are drier and lead to greater evaporation. The balance between precipitation inputs and evaporation outputs result in the lake level.

Other factors that affect lake levels include inflow of groundwater, surface water runoff and drainage, and human consumption.

Q: Much of your research has focused on the importance of sand dunes. Since we know that we can’t control water levels, would a return to more natural landscapes help protect our shorelines from shrinking? Are we messing with nature by creating flat, pristine public beaches?

Byrne: Well, if we expect the landscape to adapt to our aesthetics then we’re going to be sorely disappointed. As water levels rise, sand dunes dissipate the wave energy and help protect nearby properties from being flooded.

A woman on Facebook asked about sand dunes recently and said, “Should we just build sand dunes everywhere?” Well, no. If you try to build a sand dune by planting sand dune grasses at the base of an eroding bluff, nothing positive is going to happen. You’ll plant the grass and it will wash away. But if you have a natural collection area and you get sand accumulating, plant grasses there because it will help to build sand dunes. At high water times, that’s your savings account.

At this point in time, there aren’t very many places where I would recommend people try and do this because we’re at high water levels, so it’s an erosive situation. We just have to wait it out. When the water levels fall off again, then we go back to building up the sand dunes in locations where they would naturally occur.

Q: So as much as we try to engineer our shorelines and beaches, nature will continue to do what it wants in spite of our efforts?

Byrne: I think human behaviour causes us to want unchanging, beautiful beaches, but the natural processes on any shoreline are dynamic. Dynamic means that they are always changing. I always tell people, you never go back to the same shoreline twice because that sediment is there one day and gone the next. So you’re in the same geographic location, but it’s a different shoreline.

We are going to be in constant conflict with nature if we seek to have this unchanging system. The best environmental engineers are now creating shoreline protection that is dynamic. It allows for a window of change while protecting the shoreline. Our older shoreline protection structures didn’t have anything built in that was dynamic. That’s not a criticism of engineering – it’s just the way things have evolved over time. I think that as developed areas on the Great Lakes use more modern engineering approaches, we will create dynamic environments that are more in harmony with natural processes.

Q: What sort of government regulations are in place to protect the Great Lakes shoreline?

Byrne: The Province of Ontario has a policy statement which regulates the kinds of activities that can occur on different areas of the Great Lakes shoreline. In southern Ontario, municipalities and conservation authorities work together to regulate the shoreline based on those guidelines.

That policy statement is almost 20 years old. It needs to be updated and the province is beginning to do so. Our guidelines for flooding use the 100-year flood line, which is a statistical designation meaning that in any given year there is a one per cent chance a flood-risk area will flood. It is a calculated level and is based on the largest flood that’s happened in the last 100 years. We’re still using Hurricane Hazel from 1954 as the level of a large rainstorm.

In some places, that’s still a very significant marker in that you are unlikely to have a flood that’s as big as the flooding that Hurricane Hazel caused. But in other places there has been subtle erosion going on slowly over time that we don’t notice. So if we went back right now and measured that 100-year flood line, we might find that there is an 80 per cent probability that we could get flooding, even though that line is supposed to be the one per cent probability.

Q: So you’re saying that the flood-line marker needs to be updated and moved?

Byrne: Yes. We have all of this developed land and, in some places, it’s fine. In other places, it’s a problem because the shoreline development occurred in a hazardous area, in a place that was eroding, is naturally prone to flooding, or is an area where sediment should be able to move around. We built there anyway. This is a problem all around the Great Lakes.

Humans like to think we can engineer the shoreline, but I talked earlier about all that flow of water and all of these contributing factors – they’re so much larger than we are. We’re pretty arrogant when we think we can engineer a shoreline to withstand all of those forces. An engineer might be hired to solve a particular problem in a defined area under a particular set of circumstances. But that problem is not isolated in a box; it is nested in a larger box. And that one is in an even larger box. Then, when we solve the original problem, sometimes we cause a new problem. Our engineered solutions to shoreline management can be difficult from a very long-term perspective.

To engineer shorelines for the longer term on a large scale is very expensive and difficult, or impossible to do. So our practices have been to solve the local problems and to minimize the larger-scale and longer-term effects. Climate change is now changing the parameters and the older solutions no longer work. They were properly done to begin with, but the setting has changed and the driving and responding forces are working differently than they did before.

Q: What do you recommend for individuals who own property along the Great Lakes shoreline and are being impacted by high water levels and erosion?

Byrne: I think that individual property owners need to investigate for themselves what they can do to create a more dynamic situation instead of a static one. Municipalities are doing this already. Rather than sinking a ton of money into trying to create an unchanging waterfront, they are recognizing that they need to have some sort of dynamism built in to respond to natural processes. Property owners need to do the same: educate themselves and adjust their expectations around their property lines.

In some places, we’re going to lose the beach structures that resulted from encroachment. The places where people encroached over the low water-level lines, we’re losing that. I know people’s docks have been swept away, they’ve lost their boathouses... But the properties that have been constructed by rule-abiders have probably survived, unless there has been gradual erosion over the long term that has affected the flood line. If so, those people are in a precarious position. Governments may have to step in and expropriate properties that are in dangerous situations.

Q: Is there any reason to believe that Great Lakes water levels will continue to rise?

Byrne: The levels will come down again. We may not get the lows that we had earlier, but they’re not going to remain at this extreme height for 15 years. It might be another six months, it might be another year. Consider Lake Huron: we naturally have lower levels from about the end of August through the winter. Current models predict that the levels will either remain at the record highs or will drop by as much as 30 centimetres. A 30-cm vertical drop can expose several metres of a sloping shoreline and reveal more beach.