Uncovering the Past of Laurier’s Brantford Campus Buildings

The 20-year-old campus has developed in a way that maintains the character of many historically significant structures. Adaptive reuse – restoring historic character while renovating spaces for university purposes – is the guiding principle for development of the Brantford campus, which began with just one building, the Carnegie building, in 1999. Two decades later, Laurier has restored and repurposed several buildings in Brantford’s downtown core. 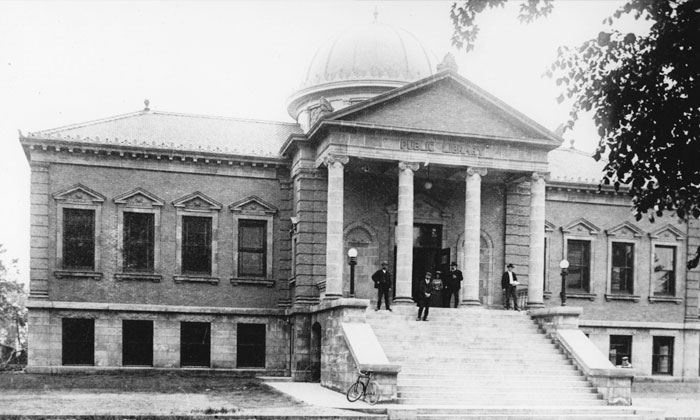 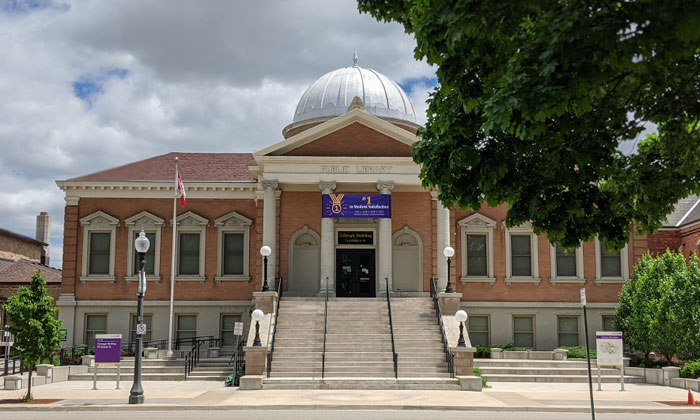 With its iconic pillars and dome, the Carnegie Building has been the centre of Laurier’s Brantford campus for two decades, but its history extends much further back than that.

The first Laurier building in Brantford, the Carnegie Building was constructed between 1902 and 1904 for use as a public library. It is one of 125 libraries across Canada funded by philanthropist Andrew Carnegie. Among the building’s many interesting features are inscriptions of the names of historic authors above the windows, including Shakespeare, Tennyson and Dickens. There’s also a Latin verse carved into the building’s portico, which roughly translates to, “I have erected a monument more lasting than bronze.” Inside is one of the building’s most striking features: a stained-glass skylight featuring Islamic tracery above a rotunda adorned with mosaic tile.

The Carnegie Building served as the main branch of Brantford’s public library until the library outgrew the space and moved into the former site of a Woolco department store on Colborne Street in 1991. The building sat vacant until 1998, when renovations began ahead of Laurier’s Brantford campus opening in 1999. Today, the Carnegie Building is home to Laurier’s Welcome Centre, classrooms, offices, meeting rooms and the Commuter Lounge, a comfortable space for students who live off-campus to study, relax and recharge.

Historical photo of Carnegie ca. 1903-1904. Photo courtesy of the Brant Museum and Archives.

The Market Darling Centre had many uses before becoming a Laurier building. In 1915, the building was home to a shoe repair store, along with a tobacco shop and warehouse. The property was home to Dominion Grocery from 1947 until 1978, when Toronto Dominion Bank constructed a new building on the property. 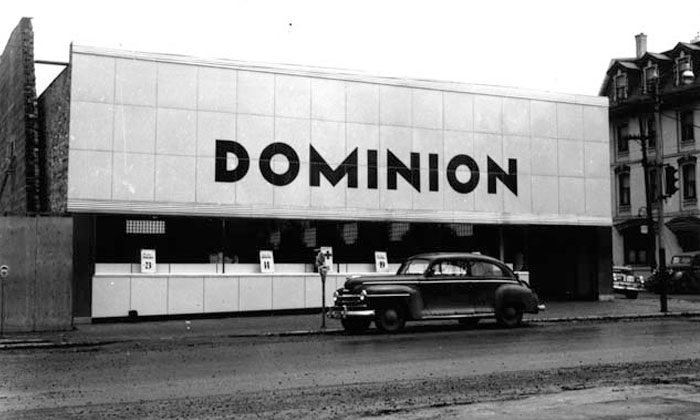 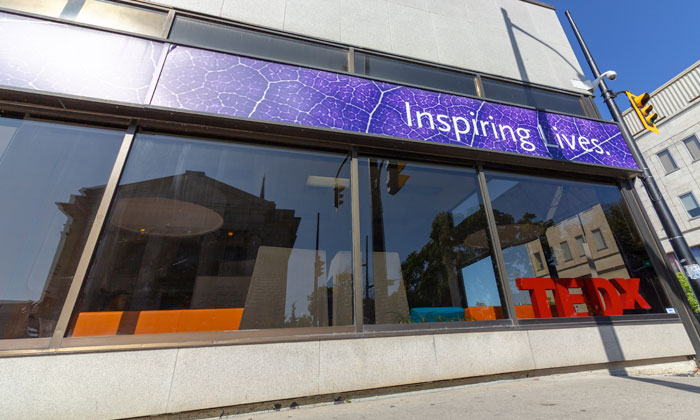 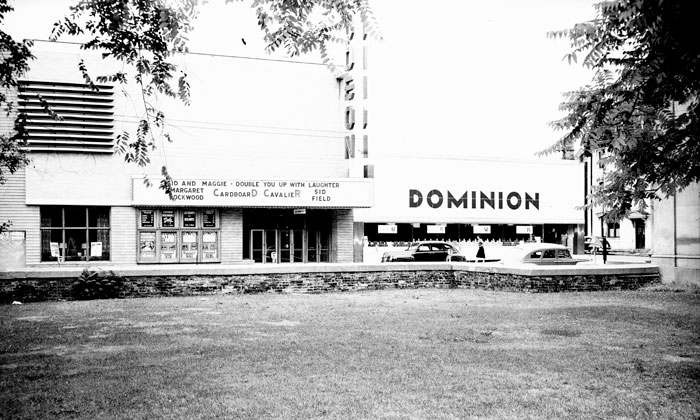 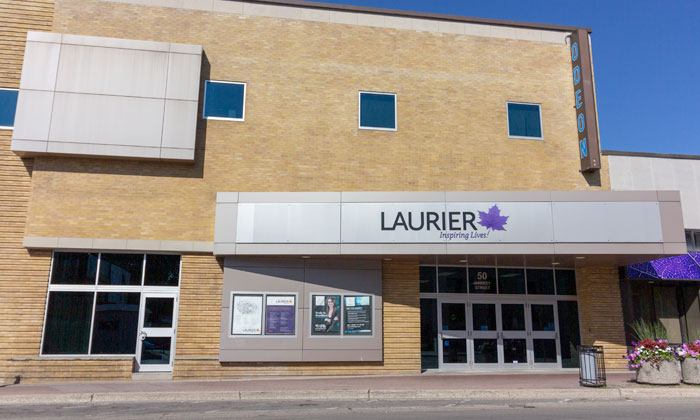 It’s well known that the Odeon Building was once a movie theatre, but few know that before the theatre was constructed during the 1940s, the property in 1915 was the location of an optician and a confectionery store. By 1927, the city’s insurance map shows only “fire ruins,” meaning the building was destroyed by fire at some point before the map was updated.

The property remained unoccupied until 1947, when work began on a “moving picture” theatre. The first film shown in the building was Blache Fury on Dec. 17, 1948, with the cost of admission at 35 cents.

Today, two lecture halls are in the theatre’s screening rooms and two smaller lecture halls on the building’s second floor were projection rooms.

The SC Johnson building, situated at the corner of Market and Dalhousie Streets, is one of Brantford’s most beautiful buildings. The classic structure featuring ionic columns was constructed in 1907. Space used by Laurier in the SC Johnson building today was once part of four distinct structures that housed the Canadian Bank of Commerce and Royal Loans and Savings.

Throughout the SC Johnson Building, there are signs of its past life, including the original detailed ceiling, a spiral staircase from the first to the second floor, a fireplace and bank vault doors. 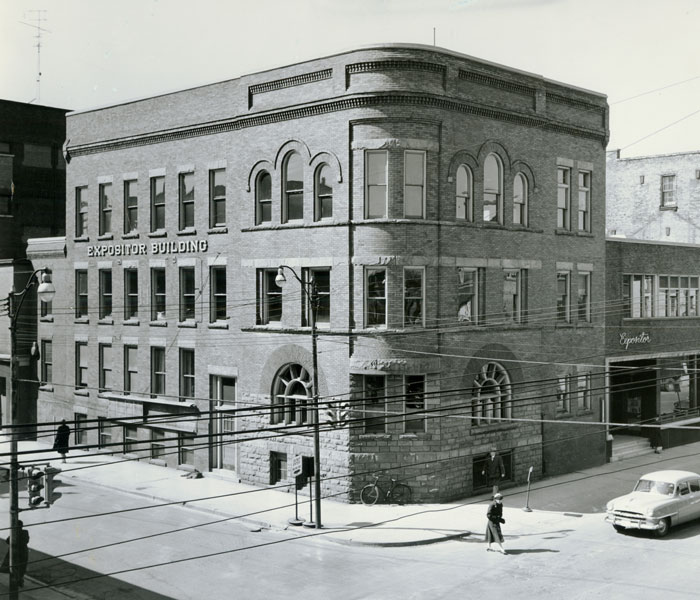 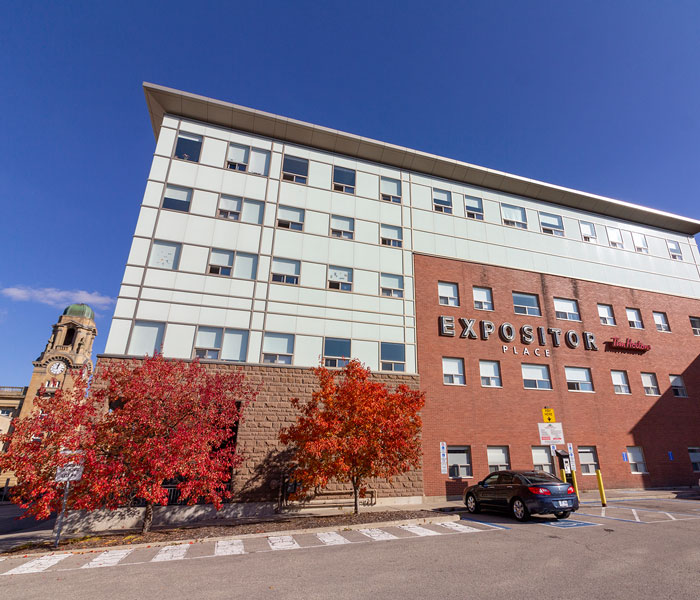 If walls could talk, what would they say at Expositor Place residence? The building served as Brantford’s hub for breaking news and community information as home of the Brantford Expositor newspaper for more than 100 years.

This 1895 structure, which was renovated into Laurier’s newest residence, Expositor Place, was home to the newspaper and its printing presses until the Expositor moved to a new location in 2010. The building has undergone significant changes over the years, including the removal of a tower and a “modern” addition during the 1950s.

Several well-known journalists once worked in the Expositor Place building, including June Callwood, a founding member of the Writer’s Union of Canada and Order of Canada recipient; Thomas Costain, a novelist and first editor of Maclean’s magazine; and Sara Jeannette Duncan, a writer and editor for several Canadian publications. Expositor Place is currently home to residence rooms for up to 213 students, communal space and retail space on the main level.

Despite being one of downtown Brantford’s newer buildings, Grand River Hall has a history of its own.

Before the current post-modern structure was built, the Bank of Hamilton and the Belmont Hotel occupied the site. During its heyday, the Belmont boasted 50 rooms and several dining rooms. The former structures were removed during a downtown renewal project by the municipal and provincial governments during the 1980s.

Laurier adapted the building’s large office spaces, converting them into its first Brantford student residence in 2001. Grand River Hall is also home to classrooms and Service Laurier, as well as administrative and faculty offices.

Laurier’s Digital Library and Learning Commons, where students can find librarians and access computers, workspace and group meeting rooms, are on the building’s lower level. On the main level, visitors will find the Brantford Games Network Lab, where Game Design students create “games to change the world.” 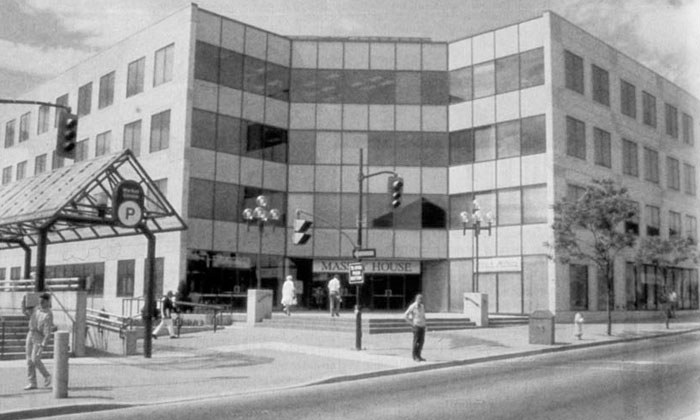 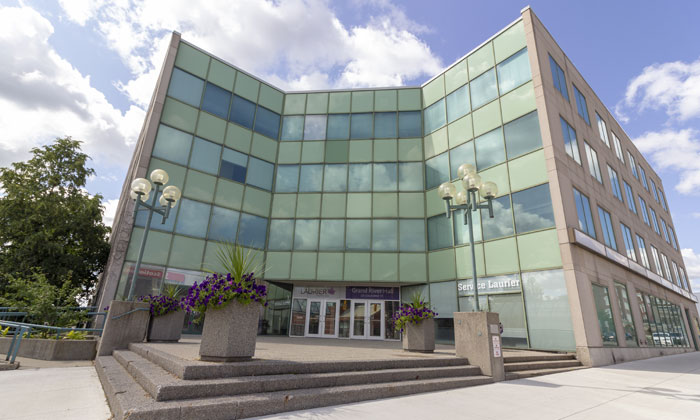 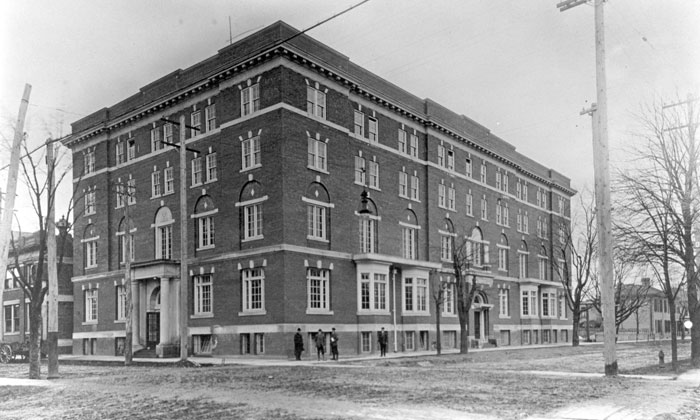 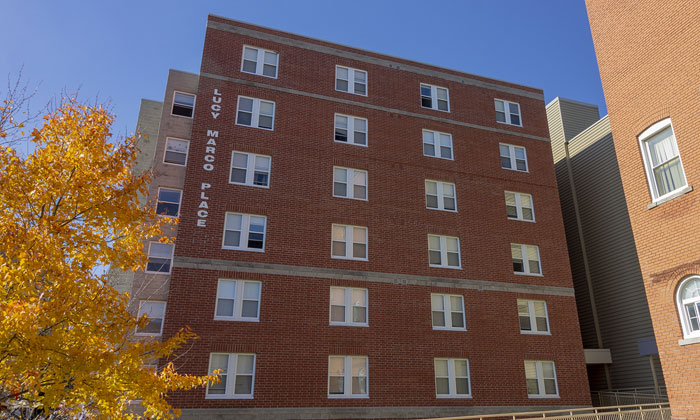 Lucy Marco Place, one of Laurier’s residence buildings, is a testament to the partnership between Laurier and the City of Brantford. The two-section building – city-owned Heritage House and Laurier’s Lucy Marco Place – was formerly home to Brantford’s YMCA, which first opened in 1913.

Many of the building’s unique architectural features remain, including the cornerstone, columns, arches and even the original “Boys Entrance” lintel.

During the first five years of Laurier’s Brantford campus, students used the former YMCA as a recreation facility. After the YMCA moved to a new location, the building was renovated to house a city-run affordable housing complex. A six-floor tower was also built where the YMCA gymnasium was located.

The newly constructed tower was converted into a university residence in 2006, with space for more than 100 students in apartment-style rooms. The building is named after Lucy Marco, a distinguished Brantford resident and current president of the Grand River Council on Aging.

Today, the Laurier and YMCA partnership continues with the 120,000 square-foot athletic complex that opened in 2019. The Laurier Brantford YMCA serves community members and student while enhancing broader community access to health, wellness and social supports.

Built in 1880, Post House served as a post office and customs house until the government services moved into a much larger building at the corner of Dalhousie and Queen streets in 1915.

The Holstein Association of Canada began using the building as its national headquarters in 1920 and doubled the space with a mirrored addition during the 1940s. The association moved its headquarters to what is now Grand River Hall in 1989 and Post House sat empty for nearly 15 years before it was renovated into Laurier’s second residence building in Brantford. Today, the residence features several apartment-style rooms in the centre of campus.

A 2002 renovation maintained many of the building’s architectural features, including an art-deco entrance, arched windows, a brick cornerstone and even a crown above the original entrance denoting the structure as a federal building. 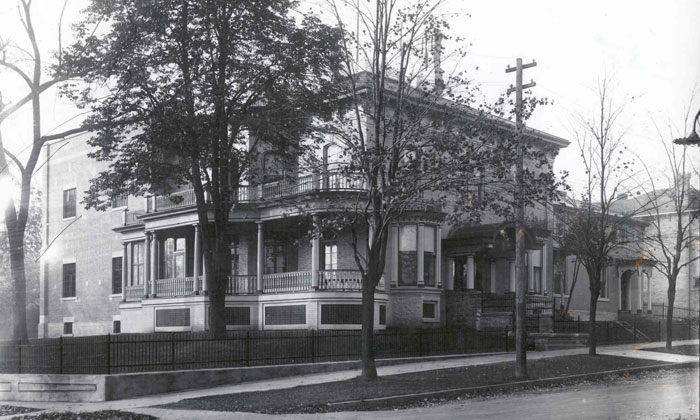 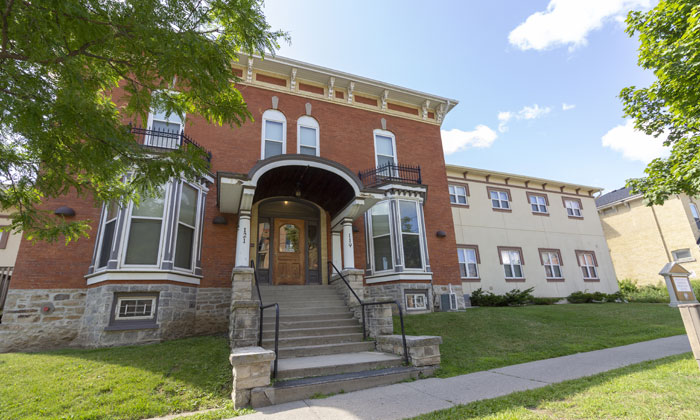 Wilkes House, located at the corner of Darling and Charlotte streets, was home to one of Brantford’s most significant pioneering families. The house, built in 1869, was the two-story home of the Wilkes family until the 1930s, when it became the meeting place of the International Order of Odd Fellows in Brantford. The Odd Fellows, who added an extension to the structure, remained in the building until 1965.

The house sat empty until 1972, when the Rotary Club of Brantford moved in, adding a gymnasium extension for use by the Boys and Girls Club of Brantford. It was during this time that hockey legend Wayne Gretzky, who grew up in Brantford, played ball hockey in the building as a youngster.

The house sat empty after the Boys and Girls Club moved out in 1989. More than a decade later, the Wilkes’ former home was transformed into a residence for students and the attached gymnasium was repurposed into Laurier’s first athletic facility in Brantford. Wilkes House residence officially opened during the summer of 2006 and welcomed its first students that fall.

Wilkes House served as the hub of athletic activity on the Brantford campus for more than a decade, but the university outgrew the gym and workout space. In 2018, the state-of-the-art Laurier Brantford YMCA opened in downtown Brantford, replacing the Wilkes recreation facility.

Laurier has plans to repurpose the gym and adjoining common spaces, continuing the adaptation of heritage buildings in downtown Brantford.