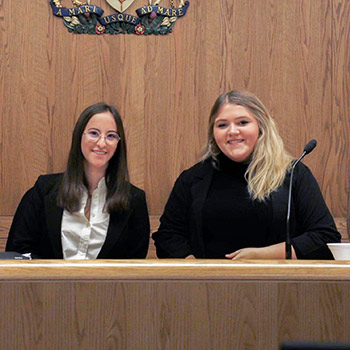 Wilfrid Laurier University’s Moot Court Club has earned its first-ever competition win, a golden achievement for a club that’s been in action for less than three years.

“Mooting at Laurier has been a fantastic way to develop legal knowledge and career-ready skills that will definitely benefit my future.”

In mooting competitions, opposing pairs of students demonstrate their understanding of the law as it applies to a real case during a simulated court of appeals experience. Teams must be prepared to represent both sides involved – the appellant and the respondent – as they are assigned their “clients” only minutes before heading into competition.

Each team has eight minutes to advocate their client’s side of the case and answer an array of challenging legal questions from a panel of judges, often made up of practicing lawyers. Students are scored on their knowledge of the case and the law, their ability to respond to complex legal questions and their public speaking skills. The team with the highest score advances to the next round of competition.

Cleland and Goldfarb outscored opponents from the University of Toronto in the final round of competition at McGill for their advocacy of the appellant in a Supreme Court of Canada case on the constitutionality of a provision in the Youth Criminal Justice Act.

Laurier teammates Sam Stewart and Gabriel Wilson also had an outstanding performance at McGill. The team, in just their second competition, placed second behind Cleland and Goldfarb on day one and reached the quarterfinals on Jan. 19. Stewart and Wilson also ranked individually among the competition’s top eight mooters for oral advocacy skills.

“It is such an amazing feeling to win,” says Cleland. “To be invited to McGill’s competition was incredible in itself, but to be placing first on top of that is very validating for the club.”

Laurier’s Moot Court Club received an invitation to the McGill competition following Cleland and Goldfarb’s impressive performance in the quarterfinals of the Capital Cup Undergraduate Mooting Competition in Ottawa in November, where they outscored an accomplished mooting team from the University of Toronto.

“Our club had a lot of positive feedback after Capital Cup,” says Goldfarb. “It feels like Laurier’s student-mooters are becoming well known as strong competition.”

The club’s recent successes and rise in reputation is a result of the dedication of its students and head coach, political science instructor and lawyer Jeff Boich (BA ’88). In the weeks leading up to a competition, Moot Court Club members meet for at least two hours most evenings to review the selected case, draft and present their arguments. Boich attends the meetings to “drill and grill” the students with potential case-specific questions that competition judges may ask.

“Jeff has been instrumental to our success,” says Cleland. “He is very dedicated to the club and gives so much of his personal time to help us succeed. His support and expertise is invaluable.”

Boich, Laurier colleague Phaedra Klodner (BA ’82) and Diane Sousa – all registered with the Law Society of Ontario – have supported Laurier’s mooting club since its creation by Emily Rezkalla (BA ’18) in March 2017.

“It feels like Laurier’s student-mooters are becoming well known as strong competition.”

Ten Laurier Moot Court Club teams will compete at U of T, while 14 will compete the Osgoode Cup National Undergraduate Mooting Competition March 7 and 8 at Osgoode Hall Law School in Toronto.

The moots at U of T and Osgoode Hall are the last ones that Cleland and Goldfarb will compete in as Golden Hawks. They both graduate in June.

“It was a big accomplishment to help our club achieve its first-ever competition win and I’m excited for the club’s future,” says Cleland. “Mooting at Laurier has been a fantastic way to develop legal knowledge and career-ready skills that will definitely benefit my future.”